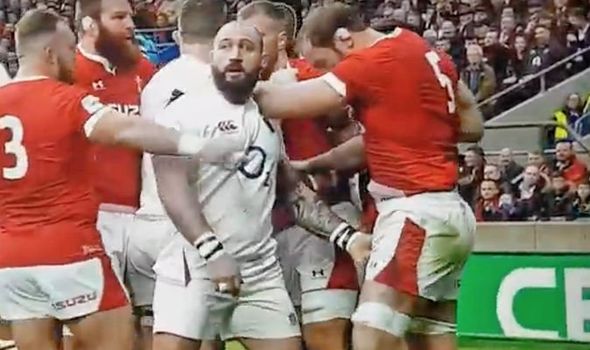 England were all over Wales in the opening exchanges of their Six Nations clash at Twickenham and Joe Marler even got up close and personal with the Welsh captain Alun Wyn Jones at one stage in a bizarre distraction technique. Anthony Watson returned to the England XV and immediately made his presence known with a brilliantly worked try to give the hosts the lead.

Wales were slow out of the blocks and minutes later a bunch of players from both teams were caught in a heated scuffle with both sets of teams exchanging words.

Marler and Wyn Jones were tied up with the Wales captain trying to defuse the situation between both sets of players.

The England star though seemed less interested in what was going on behind him as he had his head turned the other way.

But a replay of the incident showed Marler had his own unique way of defusing the situation as he could be seen jokingly grabbing Jones’ balls. 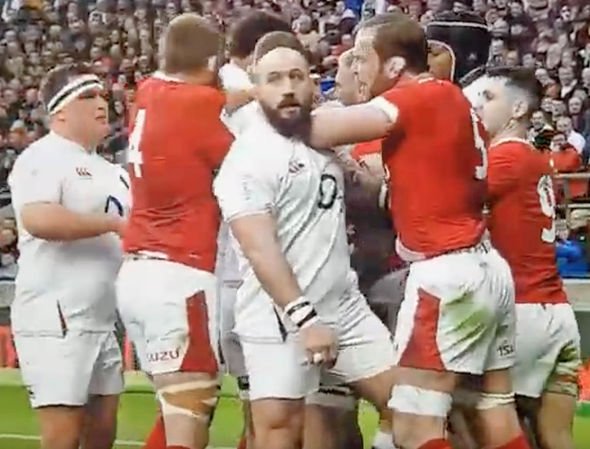 It took a while for the Wales captain to realise what was going on as he looked down to see Marler’s hand where it shouldn’t be.

And he had a clear look of surprise on his face as he pointed towards the Harlequins prop in disbelief while calling for the officials if they had seen it.

Marler meanwhile walked off with a cheeky smile etched on his face while Jones also appeared to take it in good faith.

The short clip soon went viral on social media with viewers commenting on the altercation.

James Haskell clearly lapped it up as he tweeted: “I’m kind of gutted @JoeMarler only squirted me with water now *laughing emoji* You must be his favourite @AlunWynJones.

“Joe you are a genius. The face on you!! *laughing emoji*”

Referee Ben O’Keefe didn’t take action at the time as he was more focussed on breaking up the scuffle between both sets of players.

But it remains to be seen whether Marler will face retrospective action after the game.