Former Melbourne best and fairest winner and All-Australian Jeff White says he hopes sentimentality prevails to allow Nathan Jones a spot in the Demons’ team – even as medical substitute – as the club pushes to end its 57-year premiership drought.

Having captained the side for six seasons, won three best and fairest counts and finished in the top five 10 times, Jones, 33, has been just a fringe player over the past two years, playing eight AFL matches in 2020 and a further eight this season. He hasn’t taken the field in an AFL game since round seven, and his only AFL match since then was in round 15 when he was an unused medical substitute against Essendon. 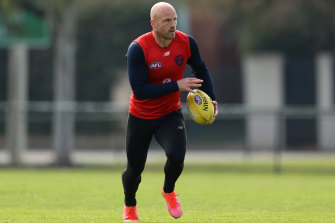 However, Jones remains around the mark of selection, having been named an emergency for the Dees’ qualifying final win over the Brisbane Lions. James Jordon was the unused medical sub for that match, with Jones’ fellow veterans Jake Melksham and Michael Hibberd also emergencies.

Melbourne have a remarkably healthy list, with experienced players Mitch Brown, Aaron vandenBerg and Neville Jetta all waiting in the wings as well.

A mainstay for most of the season, Jayden Hunt is also pushing for a recall after hurting his ankle late in the campaign.

But none of those players carry the widespread emotional appeal of Jones, who earlier this year became just the second player after David Neitz to play 300 VFL/AFL games for Melbourne. 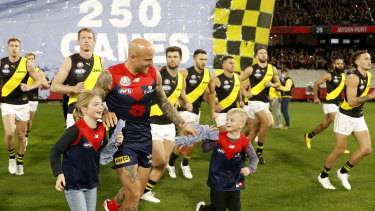 Nathan Jones runs onto the ground for his 300th game earlier this season.Credit:Getty

He has also remained in WA with teammates as wife Jerri expects twins back in Victoria.

White, 44, an All-Australian ruckman in 2004 who played in the Demons’ last grand final in 2000 and alongside Jones early in the midfielder’s career, said on Sunday that he would like to see Jones given the nod. 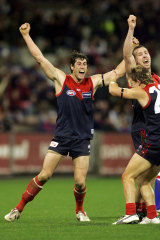 Jeff White (left) celebrates at the end of a win in 2005.Credit:Pat Scala

“It would be a fairytale and I do hope the opportunity presents itself for him,” said White.

When implementing its controversial medical sub rule on the literal eve of the season, the AFL confirmed that the medical sub from the winning team on grand final day would be presented with a premiership medal, even if he was not needed to play in the match.

Speaking after his side’s win over the Lions, Melbourne coach Simon Goodwin said Jones remained in the selection mix after overcoming a calf injury.

“Coming back from a calf injury, his last five weeks of match simulation of VFL footy have been outstanding,” Goodwin said.

“He’s put himself right in selection calculations through form. Nate’s given an enormous amount to our club – 16 years of service. You certainly feel for him at the moment.

“I know the one thing Nathan would love to be doing is playing in the 22 and being a full part of it. His contribution around the locker room, change room, and at training is having a big effect on our playing group.

“He’s very proud of his footy club. If the opportunity presents itself, he’ll be ready.”