Rugby Australia's board nominations committee will on Monday publish their pick of the candidates to fill the three directors roles in place of the departing Brett Robinson, Cameron Clyne and Ann Sherry, who stepped down last year. 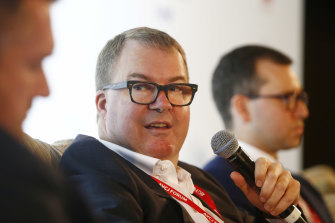 Peter Wiggs is expected to join the board of Rugby Australia this week.Credit:Fairfax Media

Board sources told the Herald McLennan, Wiggs and Herbert were set to be given the nod, but in an indication the Super Rugby sides accepted a compromise position, none of the three will be put forward as candidates for chairman.

Sydney University doyen and corporate veteran David Mortimer, who was considered a strong frontrunner for the chairman’s role just a week ago, appeared to also have fallen off the list late on Sunday.

It means interim chairman Paul McLean, who took over from Clyne three weeks ago, will remain at the helm for the next while, potentially until July.

Sceptics will look at the line-up and note that, with the addition of the likely nominees, Marlow will be the only woman in a non-executive director role. Raelene Castle also sits at the table as chief executive and executive director.

Sources told the Herald a woman would almost certainly be added to the mix in coming months.

Nevertheless it is a worrying look for the RA board to shrink its representation of women given the high profile of the organisation's Olympic gold medal-winning women's sevens program and the growing profile of the Wallaroos.

Three years ago the board had no fewer than three women, in Marlow, Carnival Australia boss Sherry and Liz Broderick, the former Australian Sex Discrimination Commissioner.

The nominees will be formally elected at the RA annual general meeting on March 30, which will be followed by a board meeting on the 31st. 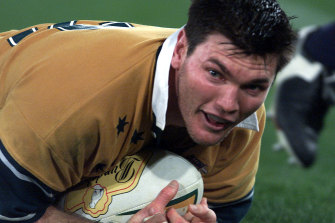 The changes, plus further likely churn, will go some way to placating restive RA members – from the minor and major state unions, to the Rugby Union Players' Association and referees – who have agitated for change for at least two years.

Clyne has faced calls for him to step down since his role in the axing of the Western Force in 2017, a decision that almost certainly rescued the game from insolvency but forever tarnished his and then-chief executive Bill Pulver's legacies.

The former NAB chief also faced criticism of RA's strategy during the Israel Folau legal saga, and was seen in some parts as weak for not sacking former Wallabies coach Michael Cheika at the end of 2018, when his position was reviewed by the board.

The change will also put increased pressure on Castle who, in Clyne, Robinson and Sherry, will have lost three of her major backers on the board. Of the remaining directors Rorke, Marlow, John Wilson and Phil Waugh, Marlow and Wilson were the only directors who had a hand in her appointment.

Rugby's broadcast rights deal is her imminent test and there is no doubt Castle needs to deliver a solid result to save her tenure. She lacks for runs on the board, after presiding over the Folau saga and seeing the 2021 Women's Rugby World Cup hosting rights snatched by New Zealand from under Australian noses.

In her favour is the appointment and installation of a new high performance structure, with Scott Johnson at the helm and a new Wallabies team led by Dave Rennie. Castle has also brokered unprecedented high performance alignment between the Super teams and head office, giving Johnson power to influence coaching appointments and player contracting decisions around the country.

The broadcast deal appears set to go down to the wire, with a growing sense the nominations of Wiggs and McLennan could bring Foxtel back to the table in a meaningful way.

Negotiations to award the five-yearly rights are in their final stages, with an Optus and Ten partnership considered the most likely outcome at this stage.