Tom Highmore is 23. He is in his first AFL season. He wasn’t the best on ground when St Kilda beat Brisbane and continued their almost-out-of-time revival of their season, but he was one of the best.

Highmore’s story evokes thoughts of Tom Stewart or Sam Collins, not only for his late arrival in the game, but for his style of play. Highmore plays a similarly intelligent game to Stewart, reading the play and intercepting the ball. He had nine intercept possessions against the Lions. He’s not of Stewart’s calibre, of course, but there is a similarity to their story.

The emergence of Highmore this year is one of the reasons for the remarkable post-bye improvement of the Saints. So too is Ryan Byrnes. He is 20-years-old and playing his 10th game. Dan McKenzie is 25 and has been around forever but has come in and added some hunger. He was drafted in 2014 and has played just 57 games. He’s a competitor, but he’s lived life on football’s fringe.

Each of them have helped add something to St Kilda, post-bye. Luke Dunstan’s return to the side is the most obvious point of difference in the resurgence. For a side wanting to re-introduce grit in their game, Dunstan came in with a brief to be unsociable. 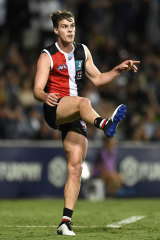 Tom Highmore in action for the Saints.Credit:Getty Images

Playing for his career, Dunstan has been good, but in terms of impact, Zak Jones’ return has been more influential. He has helped ease the run and carry burden on Bradley Hill the way Dunstan has shouldered the inside ball winning burden that falls to Jack Steele.

St Kilda might be working harder, they might have had heart-to-heart sessions in the bye, but it also comes down to personnel. They are better with Rowan Marshall, Jones, Tim Membrey, and Seb Ross back in the team, and they’re now complemented by McKenzie, Highmore, Dunstan and Leo Connolly, giving them a depth of players in form.

With Rowan Marshall and Paddy Ryder in the side, St Kilda have five wins from six games. Without both of them its three wins from ten games. The numbers don’t lie.

Eye off the ball

A month ago, David Mackay was sent to the tribunal because he didn’t offer a sufficient duty of care to his opponent Hunter Clark. 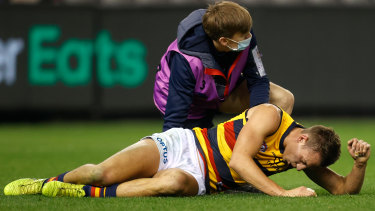 Tom Doedee came off second best from a clash with Anthony McDonald-Tipungwuti.Credit:Getty Images

This week Tom Doedee left the ground concussed because he didn’t have sufficient duty of care to himself. Or to Anthony McDonald-Tippungwuti, whom he clattered into, for that matter.

Doedee ran back with the flight of the ball to spoil. He could assume a pack was coming. If he took his eyes off the ball to check, and so protect himself and the players coming the other way, he would be at risk of giving away a free kick.

Umpires are instructed to take a cue for front-on contact from whether or not a player’s eyes are on the ball. This is not in the rules. Nowhere does it say you can’t look at your opponent before a marking contest. But that is how it is applied.

So, back to Tom Doedee. If he has a duty of care to the opposition then he must look. If he looks, the AFL tells its umpires to consider that he might be targeting the opposition player, not the ball, and he is at risk of giving away a free kick.

The player going with the flight must be told to look for what is coming. Crows coach Matthew Nicks wanted his player to pull out of the contest but knew he wouldn’t. He should have.

A change to the eyes on the ball guideline for umpires would probably not change what Doedee did and he would have run back only with eyes for the ball anyway. But in not dissimilar circumstances other players would, and should, look up.

Some losses are worse than others. This was a Brisbane loss that had a profound effect on their finals. Losing Cam Rayner early in the year to a knee reconstruction was one thing, but losing Eric Hipwood is another.

Midfielders, as good as Rayner was becoming, can be covered. Key forwards are not so readily replaced. The combination of losing two top ten talents out of the team naturally weakens the Lions, with the weakening such that they now look an unlikely flag contender. It is doubtful they could win it without Hipwood and Rayner. 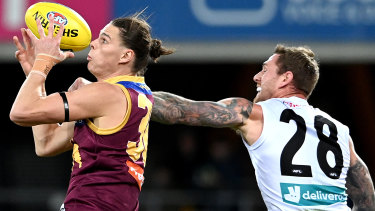 Eric Hipwood takes on Tim Membrey before leaving the game with a knee injury.Credit:Getty Images

Hipwood is not a superstar, he has always looked like he could be without ever quite elevating his game with any regularity to that level, but he’s an awkward player and one who was capable of turning a game.

The Lions moved Dan McStay to second key forward alongside Joe Daniher on Saturday after Hipwood went off but McStay is a level below Hipwood for a flag contending side.

Hipwood was the type of player who, tag-teaming with Daniher, could unsettle Melbourne’s potent defensive pairing of May and Lever. They could stretch the Dogs’ tall backs and they could deny Geelong the liberty of freeing up Tom Stewart. All of those teams will feel more comfortable playing against a Brisbane side without Hipwood in it.