The Wallabies attempted to play fast, flowing rugby but, despite several moments of brilliance, were stopped in their tracks by France who claimed a clinical 28-26 win at AAMI Park on Tuesday night.

With 20,114 supporters savouring the return of Test rugby to Melbourne, the home side tried in vain to give their fans an up-tempo, attacking contest yet found the French repeatedly dominated the breakdown.

Some will blame referee James Doleman for not taking a stronger line with the visitors but the Wallabies will need to take some blame for not taking matters into their own hands. Skill errors hurt them just as much as the France defence, with Marika Koroibete crossing twice only for both efforts to be ruled out due to a dropped ball and forward pass.

The clinical French were fuelled by the clean kicking of fullback Melvyn Jaminet, who kicked the game-winning penalty two minutes from time to give the visitors their first win in Australia in 31 years. Jaminet finished with seven penalties and a conversion from Damian Penaud’s first-half try.

The series is now tied 1-1 heading back to Suncorp Stadium on Saturday night for the third and deciding Test. 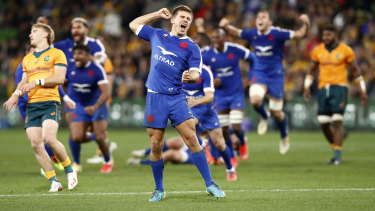 The Wallabies started poorly, conceding a penalty which Jaminet converted just minutes in.

France’s defence held well under a barrage of fast phases from the Wallabies who were looking to play at pace and beat the defence with passing with veteran playmaker Matt To’omua showing promise on the left side.

On eight minutes the Rebels’ connection of To’omua and Koroibete looked to score the first try with a wicked pass from the playmaker and a darting 35-metre run from Koroibete seeing the big winger crash over.

But the TMO official was quick to break the hearts of home supporters, finding fullback Tom Wright had knocked on earlier in the play when a high ball was mishandled. 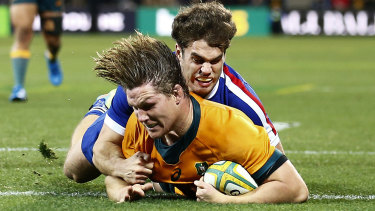 Michael Hooper goes over for a try.Credit:Getty

On 18 minutes Koroibete was again denied a try, as an audacious lofted pass from To’omua was ruled forward as it found Koroibete who acrobatically dived over in the corner.

While that try didn’t count, the Wallabies took a penalty near the posts which five-eighth Noah Lolesio converted to cut the lead to 6-3.

On the half-hour France pinched the ball in dubious circumstances from a Wallabies breakdown and flanker Cameron Woki lured in the last gold defender before passing to winger Penaud to score for a 13-6 lead.

Lolesio and Jaminet then traded penalty goals before the Wallabies found joy just before half-time – and this one counted.

After piling together a flurry of phases on their try-line against some obstructive defence from Les Bleus, Wallabies half-back Jake Gordon drifted to the vacant left-wing and scored after prop Taniela Tupou found him with a quick pass.

Lolesio converted from the sideline to cut France’s lead to three at half-time, and he tied the match at 16-16 with a penalty five minutes after the restart.

But the French earned three more penalties which Jaminet converted to have his side up 25-16 just after the hour.

This is when the Wallabies fired up with replacement centre Andrew Kellaway finding captain Michael Hooper for a try with nine minutes to play, Lolesio converting from the sideline to draw Australia within kicking distance at 25-23.

Another penalty to the Wallabies allowed Lolesio to put the hosts in front on 75 minutes which but Doleman awarded a scrum penalty to France, against the Australian feed, which gave Jaminet a kick from 40 metres out and straight in front.

He converted to send the series to a decider Test in Brisbane.