The NRL has informed Parramatta that Maika Sivo will not be subjected to the ‘no fault’ stand-down rule, clearing him to be picked for Thursday's blockbuster season opener against Canterbury.

Sivo’s court case is scheduled to be heard in Fiji on the same day of the Eels open the NRL season after he was charged with indecent assault during the pre-season. While the case will proceed on Thursday it is unlikely a final resolution will be reached until later in the year. 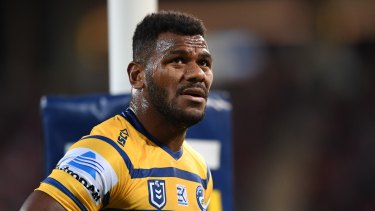 Maika Sivo has been cleared to play in round one.Credit:NRL Photos

The NRL will monitor the situation as it goes through the Fijian court system, but have ruled the star winger won’t be sidelined in the interim.

The decision is a huge boost to a Parramatta side considered genuine premiership contenders. Sivo scored a game-high 22 tries last season, three clear of nearest rival Latrell Mitchell, to announce himself as one of the game’s most destructive flankers in his rookie year. He also topped the stats for line breaks with 23 alongside James Tesdesco as part of a formidable back-three Eels combination with Clint Gutherson and Blake Ferguson.

Sivo was charged with indecent annoyance after allegedly touching the skirt of a waitress at Denarau Island's Wyndham Resort on Boxing Day. The charge was later upgraded to indecent assault.

The 26-year-old was initially detained in Fiji following the incident before he was released to return to Australia. He is not required in court for Thursday’s court proceedings.