Fremantle are considering whether to thrust captain Nat Fyfe back into the centre square against St Kilda’s in-form midfield in a battle that will help shape both clubs’ AFL finals prospects.

The Dockers sit fourth on percentage after last week’s narrow win over Port Adelaide, during which Fyfe was stationed at half-forward. 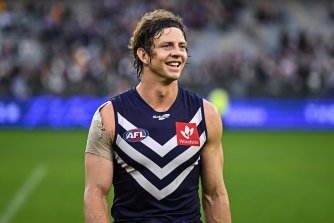 The dual Brownlow medallist did not attend a single centre bounce as Fremantle generated their best centre clearance differential of the season (19-10).

Sean Darcy took advantage of the Power’s lack of a specialist ruckman as Andrew Brayshaw, Caleb Serong and Will Brodie got to work at ground level.

Fyfe finished with 21 disposals, four score involvements and a goal.

“It was more about embedding our roles for Nathan and also our midfielders, and giving them more clarity and probably starting again with really basic roles,” Dockers coach Justin Longmuir said.

“We did that around stoppages as well, but that won’t be the role every week.

“I think Nathan at his best can add to us at centre bounce.

“He’s proven that over years and years, so we’ll look at the right time to inject him in there.”

That could come in Saturday’s trip to Marvel Stadium, where the Dockers face a St Kilda outfit that outpointed Carlton’s vaunted on-ball division (15-10) at centre bounces last week.

If not, Longmuir said it won’t be any skin off Fyfe’s nose.

“He embraced his role on the weekend and I thought he performed it really well.

“We’ll keep adding layers to what he’s doing, how he’s playing, where he can go in-game and those types of things, but he’ll do whatever the team needs.

“He showed that on the weekend and his attitude’s reflected that all year.”

Longmuir said Fremantle are hopeful they have “dodged a bullet” with Matt Taberner’s latest hamstring setback, which is not as bad as first thought.

The Dockers’ spearhead, who kicked two goals before being substituted out of the Port Adelaide game, pressed his case for selection at training on Wednesday.

Promising young defender Heath Chapman has recovered from the hamstring injury he sustained in late May and will return this week, though he may be eased back into action with WAFL affiliate Peel Thunder.