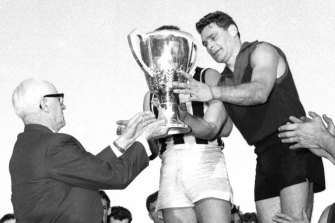 If ever a V.F.L. Grand Final should go down in history as a “crazy” premiership win, then Melbourne’s thrilling four points victory over Collingwood at the M.C.G. on Saturday certainly do so.

The match was unpredictable enough, but for back-pocket player Neil Crompton to kick the winning goal and to take the pennant away from Collingwood and give it to Melbourne was almost unbelievable in the wild frenzy at the finish.

And to add to the confusion a mark which probably saved the game was taken by Melbourne’s selected full forward, Barry Bourke, on Collingwood’s goal line shortly afterwards.

Crompton would never have kicked the most memorable goal of the match, at the 24-minute mark of the last quarter, if he had followed a long standing order from Melbourne coach Norm Smith.

Even since Crompton began playing in the back pocket three years ago he has been told never to chase his opponent over the centre line.

Fortunately for the Demons on Saturday Crompton disregarded these instructions and ventured well into the forward line to try and pick up his opponent. 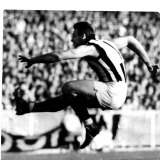 The opportunity came for Crompton to get a kick in the middle of a pack and he snapped a long goal.

This is certainly one time Norm Smith will forgive him for not following orders.

Immediately after Melbourne hit the front Bourke was thrown on the back line to bolster the defence and it was fitting that after a back man had won the game, a forward should mark in defence and save it.

Had Crompton not kicked the winning goal and the Magpies had stolen the match, it would surely have been remembered as “the day Gabbo dashed to a premiership.”

For it was Collingwood captain Ray Gabelich’s solo effort to kick the second of his two goals in the last quarter which gave Collingwood a three points lead and a good chance of causing the upset of the season.

Gabelich’s goal was almost as incredible as Crompton’s. He took up the ball on the half-forward line and with no player between him and the goals he ran 80 yards into the goal square almost losing the ball several times as he bounced it.

No one could have been more disappointed than Gabelich to see the lead snatched from the Magpies minutes later.

The thrilling finish and four points difference was well worthy of the huge Grand Final crowd of 102,469 and was a splendid climax to the season. 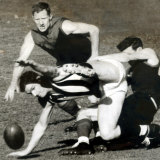 Kevin Rose is caught with the ball.Credit:The Age Archives

For Melbourne It was yet another triumph in a decade which has produced six premierships.

But it was one of the Demons’ most uncertain and shaky premiership victories and there were loud sighs of relief after the siren.

Unfortunately for Collingwood there is no prize for second, but if ever a team deserved one the Magpies did on Saturday.

It was a courageous effort to almost snatch the premiership after being beaten by 89 points by Melbourne in the second semi-final two weeks before.

Magpies’ coach Bob Rose can be proud of his players, and they should be equally proud of him. To get so close to a premiership in his first year as a League coach was a great effort.

Even after Melbourne came back to regain the lead by four points In the time-on period Collingwood refused to give in.

They stormed the goals again and appeared to be finishing with more steam.

As the final siren sounded the ball was only 30 yards away from Collingwood’s goals.

Although the play lacked skill and finesse, it was full of Interest, produced numerous highlights and could not have been more tense or nerve wracking at the end. 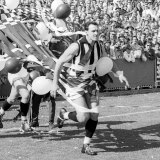 Both sides contributed some good play at times, but both also lapsed into errors.

Conditions could hardly have been better but the kicking — particularly the passing — was well below the standard expected from two Grand Final teams.

The Melbourne team failed to reach its second semi-final standard, because it was never allowed to take command and dictate the game to any marked degree.

For 10 minutes In the second quarter it looked as If the Demons were on the verge of delivering another semi-final massacre, but the dogged Magpies held together under the strain.

In fact Collingwood came back strongly just before half-time to lead by two points.

Although Melbourne’s pace was always a threat, it found itself restricted be Collingwood’s close checking and willingness to chase every time an opponent got the ball.

The Demons tried to utilise their speed by knocking the ball into the open and when they did this they usually gained control of it.

But Collingwood took a lesson from the second semi-final and played close, short-circuiting Melbourne’s attempts to develop its dangerous loose-man tactics.

Even after last week’s rest several of the Melbourne players looked tired and failed to give their true value.

John Lord’s early play in a forward pocket made him look a potential match-winner for Melbourne.

The ball was shot to Lord so often that he had every chance to put the Demons well ahead. He kicked two of his side’s first four goals. but then dropped out of the game after half-time.

Even though the Demons were down at half time they looked the better side at that stage and seemed to have the potential to do much more than the Magpies.

This was mainly because of the play of wingman Brian Dixon, rover Basso Mann, follower Graeme Wise and defenders Tas. Johnson and Brian Roet.

Both sides threw away golden chances to get more goals on the scoreboard by half-time.

Mann and Barry Vagg had bad misses for Melbourne, and Collingwood full-forward Ian Graham had a string of behinds before he managed his first goal of the match, shortly before the end of the second quarter.

Possibly the main reason behind Collingwood’s ability to stay with the Demons to the end was the improved play of its defenders In the second half.

Up to half-time three defenders, Ron Reeves, Duncan Wright and John Mahon, had only two kicks between them and were headed for another disastrous day.

Reeves, then Mahon and Wright, hit form, and after that all three were valuable players.

The Magpies missed the accustomed drive from centreman John Henderson, who had fewer than half his usual number of kicks.

The shifting of graham to centre half-forward early In the game was a good move and helped cover the lack of drive from Henderson.

The biggest single factor in Melbourne’s win was the magnificent performance of veteran wingman Brian Dixon.