With his coach Ross Lyon standing on the sidelines – having marched out of the box in frustration in a frantic finish – Docker David Mundy narrowly missed a shot at goal after the siren to leave Geelong two-point winner of a Saturday night classic at Simonds Stadium. 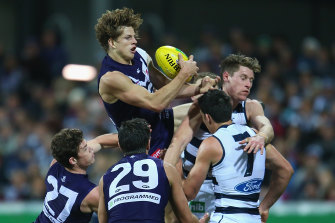 Nathan Fyfe of the Dockers takes a mark.Credit:Getty Images

Led by an extraordinary game from Harry Taylor, who took a career-high 19 marks including nine interceptions, the Cats staved off a typically nagging Fremantle in a game that followed a pattern of the home side holding its opponent at arm’s length, only for the visitors to slap the arm away and get in their face.

Taylor was the master of an extremely productive defence, playing throughout like a man who had seen this game before and knew exactly what was going to happen next. Yet nobody could have anticipated a cracking finish in which the Cats seemed home several times only for Fremantle to come again.

The Cats led by four goals at the last change but goals from Hayden Ballantyne and Michael Barlow kept nerves jangling.

At the city end, Jimmy Bartel missed twice and Travis Varcoe dragged a shot on the run as the home fans had uncomfortable flashbacks to last year’s historic home final that went horribly wrong. 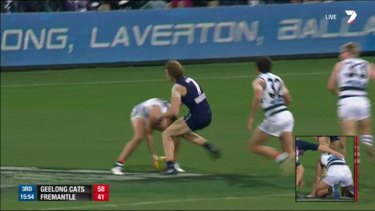 The breathing space they craved came with Mitch Duncan’s second goal, but fittingly was only possible because of Jared Rivers’ bravery in leaving his man to intercept another Fremantle fast break. Even then Lyon’s men kept coming, Hayden Crozier kicking his third and first-gamer Max Duffy his second to take the game to the wire.

The Dockers would have pinched it if Matthew Pavlich – quelled by Tom Lonergan – had found the target from long range with two minutes left. He hit the post. Lyon left his post after a chaos ball bounced off the captain’s chest.

A fluky wind played a frustrating hand, as did a couple of early decisions that exasperated the Cats as Aaron Sandilands won a perplexing in-the-back free (and missed from 20 metres) and Allen Christensen was the victim of an “advantage” call that was anything but. It did not soothe the locals that their first two goals, to Bartel and Tom Hawkins, both came from free kicks.

As did Steve Johnson’s first two possessions, and no prizes for guessing who against. All eyes at the opening were on the Docker in the metaphorical black hat, Ryan Crowley, who duly put paid to the “funny buggers” suspected in Lyon’s midweek match-up declaration by doing as his coach predicated and going to Johnson. 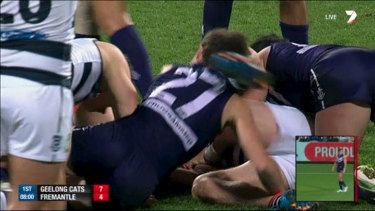 They were scrapping within seconds, and intermittently throughout the night. In the last quarter, Johnson was forced from the field with his jumper shredded.

The Dockers dominated the clearances early with Nat Fyfe making full use of Sandilands’ service, racking up four of his team’s 11 first-quarter clearances and giving Cam Guthrie plenty to think about. Guthrie had 11 touches himself to half-time, but Fyfe’s work was more damaging and more eye-catching, the second of his two first-half goals coming after a huge mark from four-deep in a pack.

This meant that for all of their first-half dominance of everything bar the stoppages, the Cats went into the break less than two goals to the good. As they hit the scoreboard through familiar faces like Bartel, Selwood and Hawkins, their opponent of many parts stayed in touch by finding goals on the break through relatively anonymous types such as Crozier and Cameron Sutcliffe.

It left the visitors threatening to embody what they’ve been in the season’s latter half – a team not exactly setting the world alight, but still finding a way to win.

Bartel’s third steadied the ship and Steven Motlop did likewise after Crozier’s second.

Geelong built from the back, with Taylor’s supreme late-season form continuing, Rivers a worthy foil, and Corey Enright playing like a man who will not only play on next year and join Ian Nankervis and Sam Newman as the only 300-game Cats, but carry on and on and beyond Nankervis’ games record of 325.

Andrew Mackie was everywhere too, surging forward to goal twice from long range.

Even with Mackie lost for half a quarter after a heavy knock, Geelong’s defenders had a lot of the ball. By contrast, dour Docker Zac Dawson didn’t touch it until 15 minutes into the third quarter.