Geelong have moved to the top of the ladder after prevailing over Melbourne in the fiercest contest of the year at GMHBA Stadium, reminding other contenders they will need to get through them to win the flag this season.

The Cats hit the front midway through the first quarter then kept their noses ahead of the rapid Melbourne as they went stride for stride and bumped each other all the way down the stretch. 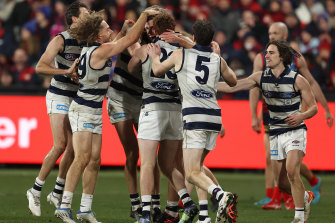 Tom Hawkins is mobbed by teammates after kicking a goal.Credit:Getty Images

It took a running goal from Cam Guthrie and then Brad Close to convert after a piece of Tom Hawkins creativity gave him a set shot with five minutes remaining for the result to be decided.

Geelong deserved the win as their pressure was elite throughout with Tom Atkins – revitalised as a midfielder – leading the way with eight tackles while Guthrie’s run caused damage. 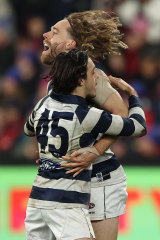 Melbourne were as tough as you would expect from the defending premiers, who had beaten Geelong in their three previous encounters. Their defence at one stage conceded just two goals when the ball lived in the Cats forward line for 14 minutes in the second quarter.

When Isaac Smith goaled in his 250th game and the lead stretched to 23 points, the Cats looked in control. But Melbourne’s Alex Neal-Bullen hit back with a goal when the ball escaped from Geelong’s forward half and made a run for it, lobbing inside Melbourne’s forward 50 for the first time in 15 minutes. A turnover from Max Holmes in the back half gifted Toby Bedford a goal to reduce the margin to two goals.

They kept coming in the last quarter; Kysaiah Pickett had the chance to level the scores midway through the final quarter with Melbourne’s third consecutive goal, but hit the post. Bayley Fritsch also missed a chance and from there Geelong were able to stabilise, keeping the ball in their forward half and edging out to 28-point lead in front of the 2011 premiership team, which was celebrating its win from a decade ago.

The two teams displayed finals-like intensity in the first half, sharing the same number of tackles but different methods of moving the ball.

Geelong were prepared to take brave kicks to open up the corridor, while Melbourne wanted to open up play through handball and overlap run.

The Cats’ method was successful in getting the ball forward but at times their final kick let them down as they went deep into a net of Melbourne defenders who sagged back deep as Geelong once did on the ground to mark kicks executed under pressure.

Melbourne’s best scoring opportunities came either from centre clearances or when they chased down their opponents in the forward half of the ground with Christian Petracca’s two first-half goals symbolising the method.

He benefited from Neal-Bullen’s chase-down tackle in the first quarter and Clayton Oliver’s scrapping in the centre square to kick long goals.

But they lost the scrap. Geelong toughed it out, their effort best displayed by the fact Melbourne champion Max Gawn did not take a mark.