Simon Goodwin’s journey from the brink to the top has been recognised by his peers with the Melbourne coach voted AFL Coaches Association coach of the year.

Having been under immense pressure to keep his job heading into the season, Goodwin has taken the Demons to the minor premiership and a grand final, with the Dees on the cusp of winning their first premiership in 57 years. 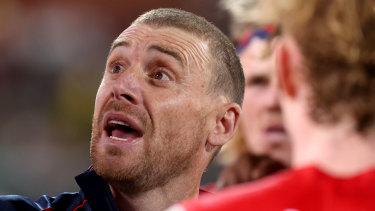 “I’m very humbled to be voted the AFL Coaches Association coach of the year by my peers,” Goodwin said.

“Although it’s an individual accolade, ultimately it reflects the efforts of our entire footy club.

“It’s an acknowledgment of the hard work and character of our entire football department and playing list.

“It is the sum of all parts that come together to create a strong football club and I certainly wouldn’t be receiving this award without the support and assistance of everyone who plays a role at the Melbourne Football Club.”

“What an incredible season Simon has had. He is not one for personal accolades but should be proud to be recognised as the AFL Coaches Association senior coach of the year. This is terrific recognition after the last few seasons. Simon held his head high, worked hard, remained focused and has landed Melbourne in the grand final,” Nicholson said.

“This award has been determined by more than 120 AFL coaches this year and we know it is held in high esteem. Congratulations Goody, what an honour to be recognised by your peers in this way, and well done to the assistant and development coaches and those around and above him at Melbourne.”

Carlton’s Luke Power, one of just two Blues coaches from 2021 still on the club’s coaching panel, was voted assistant coach of the year.

West Coast stalwart Ian Miller won the Neale Daniher lifetime achievement award for his decades of service to the club after also being a champion player in the WAFL.

The award winners were revealed online on Tuesday night.

Assistant Coach of the Year