Hawthorn’s acting president Peter Nankivell is adamant the timing of Thursday’s announcement about when construction will begin for the club’s long-awaited Dingley base was not politically motivated, with voting set to open on Friday in the club’s board election.

The Hawks have signed an agreement with ADCO Constructions to build the Kennedy Community Centre, which chief executive Justin Reeves revealed was fully funded on the football side. Hawthorn will become the sole AFL club to own its training facility and the land it is on. 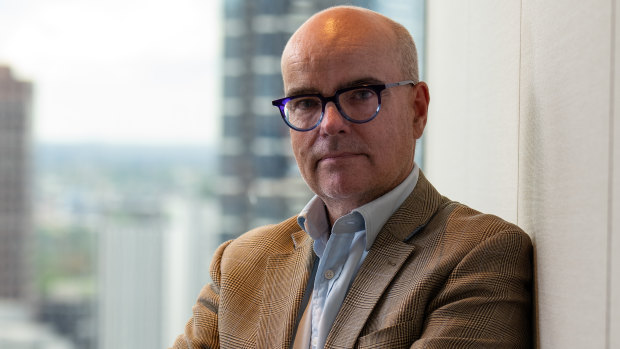 Acting Hawthorn president Peter Nankivell announced an update to the club’s Dingley base.

But there is still no guarantee the Hawks will receive the allocated $15 million from the Victorian government to enhance the community component of the $100 million project.

Construction will start in February on the 27-hectare property, but before then Jeff Kennett’s replacement as club president will be decided. Member voting will conclude on December 9. 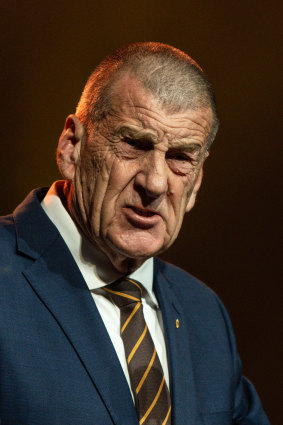 Nankivell, who was Kennett’s vice president for the past five years and is his preference as successor, is up against the Hawks For Change-endorsed Andrew Gowers, a 1991 Hawthorn premiership player.

The Hawks continue to deal with the AFL’s ongoing investigation into historical allegations of racism during the Alastair Clarkson regime, allegations that Clarkson and fellow former Hawthorn personnel Chris Fagan and Jason Burt deny, but the election has also divided the club.

The Hawks For Change ticket has focused on, among other matters, Kennett’s antagonistic relationship with the state government and how his “late-night tweets” may cost Hawthorn a $15 million injection.

Asked whether the warring between the parties was inevitable, Nankivell said it was “disappointing”.

“To quote Michelle Obama, ‘When they go low, we stay high’,” he said.

Nankivell understood the scepticism about the announcement but said the timing was “unrelated” to the ongoing board drama. The agreement, he said, had to be made now to ensure construction was completed by mid-2024.

“It was at the last board meeting of the Hawthorn Football Club last month that the decision was made to sign the building contract with ADCO,” Nankivell said.

“I don’t see it like that [the announcement being a late bid to win votes]. The staff from Hawthorn and the board have been working assiduously to get this contract concluded with ADCO Constructions, and we are thrilled to be here and doing that.”

Reeves said the Hawks were certain the Kennedy Community Centre would be operational by the target date and that it would be “the best in the business”.

He also confirmed funds from their mid-year sale of the WestWaters Hotel, one of two pokies venues they offloaded, were always earmarked to help deliver the Dingley project.

Hawthorn released its 2022 financial result on Wednesday, with Nankivell declaring the Hawks had never been more financially sound, in large part from making a $32 million profit on the gaming venues. 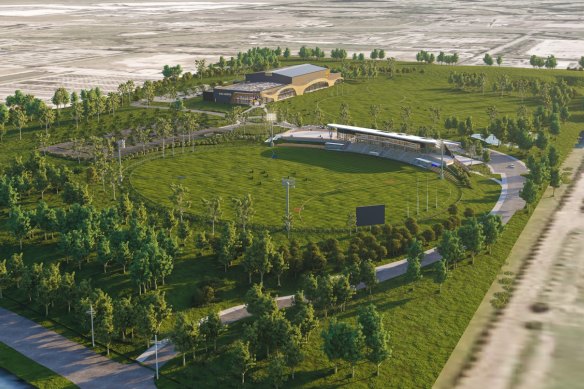 An artist’s impression of the proposed Hawthorn training and community centre at Dingley.

Reeves hopes the state government will release “in the short term” the $15 million funding for the Dingley construction, otherwise not all community elements will become a reality.

“The government has been very, very supportive,” he said.

“They’re very invested in those community facilities, and we will continue to work with them on the best outcome for everyone.”

Board candidate and former deputy premier James Merlino, who is part of Hawthorn For Change, told The Age the Kennedy Community Centre was “an incredibly exciting project” but needed to go beyond football.

“As the club stands, there’s a disconnect with many members,” Merlino said.

“The project that was announced today is solely a football project – and it’s got to be more than that.

“What we want to see in Dingley is a Kennedy Community Centre that is delivering elite facilities for the men’s and women’s teams but also is a loved venue for Hawthorn members and the broader Hawthorn community.”

Merlino said a Gowers-led board, including himself if he was elected, would endeavour to cooperate with the government to secure the pending $15 million.

“The funding for the projects has been put in contingency and that allows departments to work with the clubs and proponents of these projects,” he said.

“That’s normal. What is abnormal is the approach the Kennett-Nankevill board has taken – the commentary, the attacking.

“It’s commonsense if you want to engage and get an outcome, then you need to truly engage and be co-operative and engage maturely with governments … but what we’ve seen from the Kennett-Nankivell board is the opposite.