Matt Burton can, in part, thank former Panther Dallin Watene-Zelezniak for the sliding doors moment that would set him loose on a season that would surpass his wildest dreams and help Penrith harness the backline star they didn’t know they needed.

Burton was a rising star at the Panthers, but the now 21-year-old had played just five games in the top grade in 2020 and one in 2019. A half by trade, he had Nathan Cleary and Jarome Luai in his way, and neither of those appeared to be going anywhere in a hurry.

But Cleary suffered a head knock in the 28-0 win over the Bulldogs in round two, coming off second best from a clash with Watene-Zelezniak. Burton was elevated from reserve grade and that was all she wrote as the Dubbo product quickly became a fixture for the Panthers, although in the more foreign role of centre instead of as playmaker.

Necessity is the mother of invention and so successful was Burton as a three-quarter that he would end up being one of the centres in the Dally M Team of the Year. He now shapes as key man for Penrith in their grand final against South Sydney on Sunday.

Through it all, he was the subject of a fierce tussle between Penrith and his club from next season the Bulldogs, who were fuming he wasn’t allowed to leave early given the apparently limited chances for him to play during the season.

Bulldogs powerbroker Arthur Laundy has since apologised for his public anger towards Penrith, while Burton is certain the year at Penrith has turned him into a far superior player given the experience he’s gained along the way. 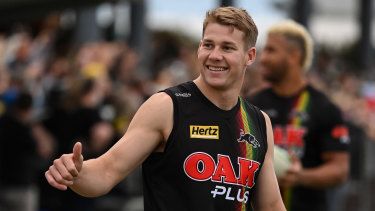 “I wasn’t even a look-in for the starting team at the start of the year, so it is pretty crazy to see where I am now. I have been grateful to get that centre role this year and I have loved every minute of it.”

Since he rapidly cemented his spot in the starting side, Burton has been able to simply sit back and concentrate on his game as Panthers stars like Cleary, Luai and Brian To’o dominate the headlines. Happy to fly under the radar in his signature headgear, Burton has put his nose to the grindstone with astonishing success.

He scored 16 tries and dished out 13 try assists, all the while adjusting to the added physical and defensive demands of being a modern NRL centre, which requires sharp decision-making and the ability to withstand a bruising when carting it out of your own quarter.

“I never played any centre (growing up). I always played five-eighth,” Burton said. “It was tough to learn all the different roles of a centre, like the yardage carries and defensive reads. It is all different but everybody here has helped me.

“Stephen Crichton is only young but he has helped my game a lot. It is awesome to have Bizza (Brian To’o) outside me. He is an absolute weapon.”

Burton is thinking only about grand final glory this week but the good news for Bulldogs fans is they are getting a far more battle-hardened campaigner, who knows the demands of high-level weekly NRL rugby league, when he arrives at Belmore to start the 2022 season.

But Burton will have other things on his mind, as he always does. He has always played in honour of his best friend Sam Fraser, who died in a tragic drowning in Dubbo when still at school.

It is Fraser’s headgear that Burton wears each week, while the Fraser family has been in constant touch with Burton as his career soars. They will be heavily invested on Sunday evening. 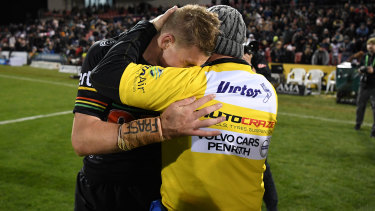 Matt Burton after his debut in 2019, with “Frase” written on his wrist.Credit:NRL Photos

“Everything I do is for my family and him,” Burton said. “He passed away when he was 16 and I always wanted to do well for myself after that. It was devastating, but it still drives me now and gives me a lot of inspiration.

“Sam and I went to school together and grew up best mates our whole life. We had a pretty tight squad there [at St Johns]. He was my halfback and I was the five-eighth. He was a tough little fella.”