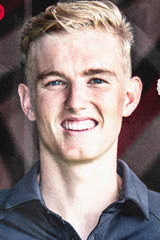 Tom Hird has been signed as a Category B rookie.

The Hird name is set to live on at Essendon for a fourth generation, with club legend James' son Tom signed as a Category B rookie by the Bombers.

Tom Hird has signed a two-year contract with Essendon as a non-registered athlete. He chose to pursue a career in soccer in the last few years and recently trialled in the Netherlands.

A non-registered player can be signed by any club at any time, provided they have not played Australian rules football at any level for three years.