Waratahs five-eighth Will Harrison feels “10 kilos lighter” after a pressure-relieving win over the Lions on Friday night, and the 20-year-old’s stellar performance was all the more remarkable given the family heartbreak he overcame just to take the field.

The Herald can reveal Harrison was shattered by the death of his grandfather and did not train on Monday so he could be a pallbearer at his funeral. 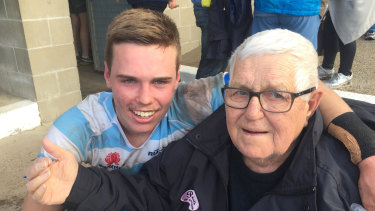 Will Harrison with his grandfather Barry ‘Bolla’ Telford.

Barry Telford, a rugby lover and popular figure at the Coogee Surf Life Saving Club, passed away peacefully at the age of 84 on February 17, a few days after the Waratahs lost to the Melbourne Rebels.

After what was the side’s third defeat in as many matches, Harrison went straight from Sydney airport on the Saturday to Prince of Wales Hospital to be at Telford's bedside. 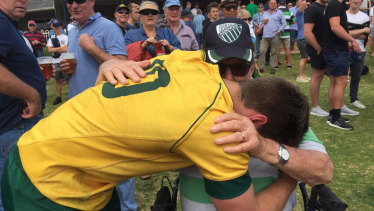 Harrison and his grandfather hug it out after a Junior Wallabies match.

During the bye week, Harrison went to the hospital whenever he could, sometimes straight from training to be with Telford, who always took a keen interest in his grandson’s football journey.

When Harrison made his Super Rugby debut against the Crusaders in New Zealand, hospital staff set Telford up with an iPad so he could watch his grandson play. He was proud as punch.

However, his condition deteriorated. It was the last time he saw his grandson play.

I spent as much time as I could with him and said my final goodbyes. 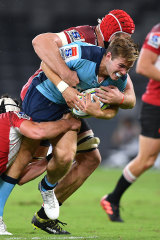 Will Harrison is tackled by Len Massyn at Bankwest Stadium.Credit:AAP

Just before Telford passed away, Harrison gave him his Waratahs cap, which sat by his bedside until the final moments of his life.

“He wouldn’t miss it,” said Harrison of his grandfather watching his Super Rugby debut. “It was tough. I’ve been telling a lot of people that he’s been lucky to live the life he lived. He’s been dying for three years. For him to see me play footy for the Waratahs was amazing. I spent as much time as I could with him and said my final goodbyes.”

Harrison was on the training pitch practising his kicking when he received the  phone call. He’d spent the previous evening by his grandfather's bedside with family saying  goodbye  to the man who went by the name of "Bolla".

A note on the Coogee Surf Life Saving Club website read: “Bolla was one of the club’s great characters and always fun to be around. He was a true two blues surf club bloke and a mad red and green Souths man. You will be missed old mate.”

Just four days out from a must-win clash against the Lions, Harrison’s mind was anywhere but on football as he sent off his grandfather in style.

“To see all family and mates get together and the rugby club was awesome,” Harrison said. “He didn’t say much, but he was always proud of me, and I knew that.”

Harrison was determined to take the field at Bankwest Stadium on Friday and put in a performance Barry would be proud of. 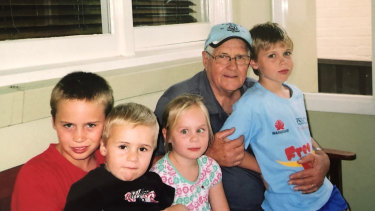 That he did in spades as the Waratahs sliced through the Lions early to open up a 19-3 lead before hanging on 29-17 to register their first win of the year.

“I was playing for him last night,” Harrison said on Saturday. “I know he’d be watching up there. It feels like I’m 10 kilos lighter. We finally clicked last night for the first 20 minutes and showed what we’re capable of.

“There’s been a lot of stuff we’ve had to deal with. It was a pretty tough start with the Crusaders and then two wet games. We finally got a good track and played footy.

“We’ve been training well, and we’ve been buying in, but just haven’t been getting the result. To get the result was unreal. There was a different vibe in the sheds afterwards.”

“His mental toughness, resilience, call it what you want, to go out and perform like he did today on the back of a couple of tough performances just shows the level and depth of his character,” Penney said. “It doesn’t mean he’s the finished product yet, but it’s a great comeback for him where he was maybe last week.”