Paul McGregor says he is "committed" to his role as Dragons coach after an underwhelming performance in round one raised further questions about his future.

The Dragons lost 24-14 at home to a dominant Wests Tigers – a far from ideal start to the season for McGregor, who is desperate to prove his worth after a 2019 review spared him from the axe despite the club finishing 15th. 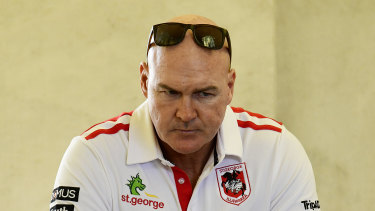 McGregor said the start of the season was “very important” for his players in proving their worth, and was determined to not be “chasing teams” after a couple of early losses. Credit:AAP

The NRL has asked all players to self-isolate amid the health crisis. Clubs are also set to blanket test every player in the competition for COVID-19 in a move that could bring the season to a grinding halt.

"They understand the difficulty around the situation with what's going on," McGregor said. "We're listening, we're learning. We're putting best practice into everything we do at training, and certainly the players know about hygiene and isolation."

McGregor said the start of the season was "very important" for his players in proving their worth, and was determined to not be "chasing teams" after a couple of early losses.

"We put ourselves in a position to win the game multiple times [last week] but we just didn't," McGregor said. "It's about improving on round one and going out in the best possible way of winning round two and that's what we've done this week, is prepare well to play well."

The Dragons boss made the difficult call to punt Zac Lomax back to the wing after the round one loss, reinstating Matt Dufty at fullback. McGregor said he made the call on Dufty after seeing an "attitude shift" in the 24-year-old.

"He's gone from a person that didn't really like too much training to owning training," McGregor said. "Certainly his values around the team about what needs to be done has improved our side so I'm looking for Dufty to go out there and really be exciting."

The Panthers are shaping as one of the strongest clubs in the competition after pulling off a huge upset in round one by defeating the defending champions.

Tariq Sims' one-game suspension for a shoulder charge means Tyrell Fuimaono will come into the starting side, with the Red V still without their captain Cameron McInnes due to a knee injury. He is looking to return in round eight.