The Brisbane Broncos have issued an apology to former great Steve Renouf after the Indigenous star claimed he was the subject of racial abuse during his playing days at the club.

Renouf, who won four grand finals with the Broncos, spoke publicly for the first time about his treatment from fellow players in an emotional video interview published on the NRL's website on Friday. 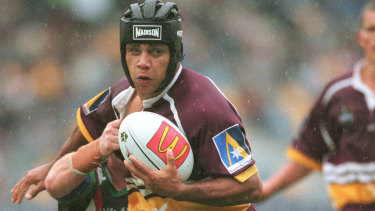 "Today at the Broncos we are doing all we can to give back to Aboriginal and Torres Strait Islander people, who hold a central and very special place in our club.

"We are incredibly privileged to now have more than 30 per cent of Broncos staff who are of Aboriginal and Torres Strait Islander heritage.

"Many of these staff are now empowering and inspiring the next generation and assisting young people in our 'Beyond the Broncos' programs."

Renouf, 50, fought back tears as he recalled a story of teammates using an acronym he was unfamiliar with after he arrived at the club as a 17-year-old. He was later told the acronym stood for three racial slurs.

It was crushing this was coming out of the mouths of guys I used to watch on TV only a year before.

"I signed with the Broncos when I was 17 and '88 was my first year and I came there with the earmuffs on as I was brought up," Renouf told NRL.com.

"There used to be this saying 'NBD'. I used to think, 'I wonder what that acronym means?'

"But once again you block that out. And the reason why you get a bit emotional is because it is my club. In hindsight I deflected a lot of that.

"[But] it was crushing this was coming out of the mouths of guys I used to watch on TV only a year before. It just showed to me it had been around for a long time, not just at our club. Brisbane is not a racist club, it was just a few individuals."

The NRL's Indigenous Round started in spectacular fashion when all 32 of the Rabbitohs' points in their comeback win over the Dragons on Thursday night were scored by Aboriginal players.

Said White: "We applaud Steve for having the courage to speak out, and we agree with him in hoping that speaking out will make a difference going forward.

"I can assure Steve and every Broncos member and supporter that the Broncos remain absolutely committed to helping and supporting Aboriginal and Torres Strait Islander people."