Latrell Mitchell's South Sydney captain Adam Reynolds has lashed critics of the NRL's Simply The Best advertising campaign as "so crazy", imploring fans to back the Indigenous leader and the film's other stars.

As the fallout from the two-minute clip featuring a throwback to Tina Turner's famous lyrics from 30 years ago rumbles on, some of the NRL's highest-profile stars argued the advertisement is not political grandstanding. 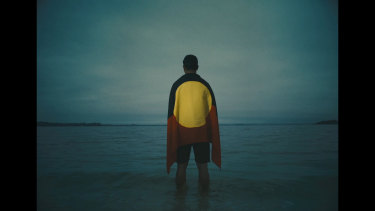 Latrell Mitchell is draped in the Aboriginal flag in the ad.Credit:NRL

"It is crazy," Reynolds said. "It is so crazy. "I feel sorry for the boys that get involved in it. They've been brought into it and are proud of their culture, as we are proud of where we're from. I think we can get behind those boys a bit more and show them a bit more support. It's just crazy the way people look at it in a different light to the way it's meant to be seen.

"I loved [the campaign]. I think it's probably the best ad campaign I've seen in the NRL for a long time. I loved the song and I love everything they've done with it, reflecting over the last 30 years. I think it's a great story the campaign has shown."

Greenberg officially launched the NRL season at a glitzy function in Sydney's inner west on Thursday night where the Simply The Best revamp was a major talking point.

The NRL consulted many stakeholders, including a small group of media representatives, who were asked for their 30 most iconic moments from the last 30 years.

I loved [the campaign]. I think it's probably the best ad campaign I've seen in the NRL for a long time

The final product featured references to the Super League war and fans marching in the street to protest South Sydney's expulsion from the NRL.

But critics have lashed the campaign with veteran adman John Singleton arguing the NRL should be "run by the Anti-Discrimination Board".

But it didn't wash with some of the game's biggest stars who flocked to Sydney a week out from the season.

"The reality is that's an ad campaign for a season launch for any other game or any other business in Australia," Manly captain Daly Cherry-Evans said.

"It's obviously trying to send a message and it's certainly not the negative message people are talking about. I think if people take things for what they are and not what they want it to be then it will change the perception of what is actually happening."

Said Wests Tigers ace Benji Marshall on some online criticism directed towards Mitchell: "I think it's great [Mitchell's] sticking up for what he believes in. There's always been a bit of a disconnect between the indigenous and [white] Australians.

"I'm happy the indigenous people are getting recognition in this ad because they probably feel like they've been hard done by over the years.

"I have a lot of friends who are indigenous and they're so proud being a massive part of that ad. That inclusion, it's the way we do it in New Zealand and it makes me happy they got that.

"I don't understand why Latrell cops it. He's just representing his people. We encourage everyone to be who they are. I don't see the problem with it.

"This is what I like about Latrell – he's sticking up for racism and bullying on social media. You have to applaud that because there's too much of that crap happening online."

Cameron Smith said of Mitchell's treatment since the commercial: "He is one of the better players in the game so he is a target. Everyone knows who Latrell Mitchell is. Personally I like the ad. I think they have done a great job with the inclusiveness of everyone. It sends a message that our game includes everyone."