The NRL has no plans to tinker with its six-again interpretation before the end of the season after league legends Brad Fittler and Peter Sterling took aim at teams manipulating the tactic, which the NSW coach described as ‘taking the p***’.

NRL head of football Graham Annesley said referees retain the option to penalise deliberate breaches by using the sin bin as the tactic of resetting a defensive line by slowing down the ruck or blatantly standing offside came into harsh view on the weekend.

There are growing calls for the NRL to peel back its six-again rule to allow full penalties for teams pinged inside the 10 metres, as was the case last year.

Fittler and Sterling pointed out the Roosters conceded three set restarts in as many plays late in their win over the Cowboys as they desperately defended their line with a six-point lead.

Referee Ashley Klein declined to halt play and send any of Angus Crichton, Isaac Liu or Sam Walker to the sidelines despite all three infringements coming within a space of a minute.

The Roosters went on to win the match with a further two tries after North Queensland’s Scott Drinkwater was penalised for a double movement at the end of the set.

“These sorts of things always polarise opinion and there’s a lot of different views on whether we should take a particular path, or walk back from a particular direction,” Annesley said. “But those things won’t be decided between now and the finals. Everything will be looked at at the end of the year.

“Under the six-again rule referees have always had the option of penalising and sin-binning if they believe that it’s deliberately conceding [infringements] to gain a tactical advantage, or in the case of continuous infringements.

“That’s obviously a judgment call for them to make based on the circumstances, but they’re not prevented from doing that.”

The tactic of teams giving away six-agains early in tackle counts deep in opposition territory has become more of a factor as the season has worn on, culminating in a controversial State of Origin series finale on Wednesday night. 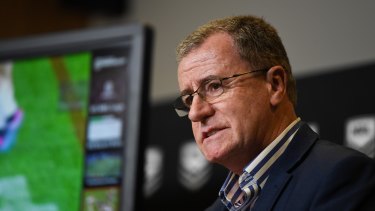 NRL head of football Graham Annesley says the six-again rules won’t be revisited until the end of the year.Credit:NRL Photos

Gerard Sutton blew 14 set restarts, eight of which were for Queensland and NSW standing offside. That was on top of seven penalties.

Asked about the increasing prevalence of six-agains, Fittler told The Footy Show: “We had the same in Origin, three on one tackle and we didn’t make five metres.

“Sides realise now, especially on early tackles, they’re giving up a tackle. We’ve got to have a look at that rule, I believe – especially with the 10 metres and switching that back to penalties. Teams are just taking the p***.”

Australian Rugby League Commissioner Wayne Pearce has been a strident supporter of the six-again rule, claiming it had all but eliminated wrestling from the game.

And Annesley said it had helped nurture a free-flowing contest in most games after its introduction during the COVID-19 season shutdown last year.

“If you’re looking at the original intention of the six-again rule, it was to promote continuity of play and increase the entertainment value for fans – and I think many ways it’s done that,” he said.