Geelong defender Jack Henry prefers not to look back.

That becomes clear when he is asked about the lessons gained from playing in last year’s grand final loss to Richmond.

“It’s a hard one [to answer] because I like moving forward,” Henry said. 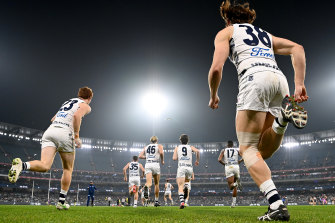 A similar polite, team-oriented response comes to a question about Friday night’s qualifying loss to Port Adelaide, when Henry was one of the Cats’ shining lights.

“We have a lot of faith in our group that we can obviously play better than that and that we will get it right this week,” Henry said.

Such a positive mindset from a man who only turned 23 on Monday is testament to the football school he has been attending since joining Geelong via the rookie draft.

“We really like to test each other and have high expectations of each other,” Henry said.

“We all have a similar mindset of just getting the job done. It’s about helping out [your teammate] if they have got a tough match-up and working together and enjoying working with each other. Defend first, then build the ball up and help other lines.”

That octet of Cats defenders rates Henry’s temperament and willingness to learn, but there are no games gifted. Henry was reminded that constant improvement was necessary when he was left out of the team in round one this season, after playing in 66 of the previous 69 Geelong games.

Henry took the feedback on and pushed forward in a measured manner, as he was being asked to do. 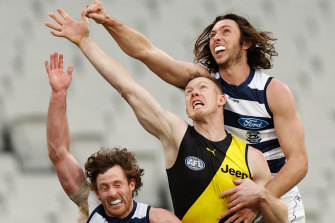 “It felt clear why I wasn’t in there in the beginning in terms of what I needed to work on. In the pre-season games I had not improved [in the area they wanted me to]. When I had the ball [I had] to back myself a bit more and make a bit better decision than just blazing away with it,” Henry said.

“When I got my opportunity to get back in I went for broke a bit and tried to do as much as possible to do those things to keep my spot, I wasn’t too negative. I think we have so much depth and such a good group you always wonder when someone might miss out.

“It almost helped me to not get too complacent and to be better and hold my spot.”

That drive to get better is something he shares among the group of tight mates he gathered when he joined the club, including Brandan Parfitt, Esava Ratugolea, Sam Simpson, Mark O’Connor, Quinton Narkle and Zach Guthrie.

They understand nothing at the Cats is won easily, all sharing the rocky road to cementing a spot in the seniors. But, importantly, they also enjoy each other’s company on the way.

All bar Guthrie and Narkle lobbed on O’Connor’s family’s front door in Dingle a few summers back to see where their Irish friend sprung from. O’Connor grabbed his old room while the other four Cats piled on to a few mattresses in a spare room for three or four nights in the picturesque port town in Ireland’s south-west.

“Mark’s family were very welcoming and loved having us there, as much as we probably were a bit of a nuisance and hard work trying to feed us all,” Henry said.

“It was great to see where a good mate of mine and teammate comes from.”

On another break Henry, who grew up near the Cats’ ground and played his junior football at St Mary’s in the shadows of the light towers, also travelled to Darwin with O’Connor to see where Parfitt’s roots were, the friendships among the players only growing during the COVID-19pandemic, as they spent day after day in hubs together.

The group goes about business quietly, which suits Henry. He stands tall on the field but appears happy to fade into the background off it, so respectful of the culture he walked into as high-leaping national junior decathlete.

That explains why he thought his timing was good when he went missing on Monday night as the club dietitian appeared at dinner carrying a cupcake and a candle to celebrate the birthday Henry shares with teammate Max Holmes.

“I avoided the spotlight,” Henry said.

He won’t when the ball is bounced for the semi-final, however, the defender who was nominated as the club’s most courageous player by teammates ready to get the job done, so he can look forward to a third consecutive preliminary final.

“We will come out with more of an edge. We will get after it and hopefully get it done. I don’t see us sitting back,” Henry said.

Or looking back, as Henry focuses, once again, on getting the job done.