Israel Folau could be a candidate for Super League's Man of Steel this year, according to Hull coach Lee Radford, whose side will provide the first opposition for the dual-code international on English soil.

The 30-year-old former Wallaby made a try-scoring Super League debut for Catalans Dragons in their 36-18 win over Castleford in Perpignan a fortnight ago and promises to be the centre of attention at the KCOM Stadium on Sunday (Monday morning AEDT).

"He's an absolute talent, he could be Man of Steel," said Radford. 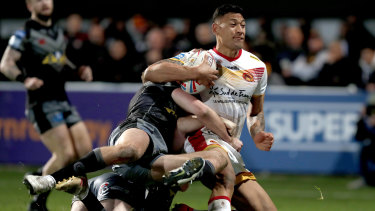 "He's multi-talented, at league, union, AFL, you can tell he's played AFL by how he jumps, he jumps like Michael Jordan."

Radford has identified Folau's ability under the high ball in attacking positions as his greatest threat and is relishing his duel with the in-form Josh Griffin.

"He's a brilliant player. I'm really looking forward to seeing Griff go up against him because Griff is in a bit of form as well at the minute.

"He looks right at it in terms of performance, so it's a ding-donger and I know Griff is looking forward to it as well.

"Folau is a real aerial threat. The only way to stop that is to try and make them kick out their own end and obviously that's something we've got to do very well on Sunday."

Catalans' signing of Folau drew widespread criticism after the player claimed on social media that "hell awaits" gay people and some Castleford fans displayed rainbow flags at the game in Perpignan to demonstrate their support of LGBT issues.

The Dragons responded to complaints by insisting the only flag requested to be removed during the game was one obstructing an advertising hoarding but they have been asked by the Rugby Football League after it carried out its own investigation to put provisions in place to avoid any confusion in the future.

An RFL spokesman said: "Whilst no formal disciplinary action is being taken against the club, the Dragons have been issued with an advisory notice regarding improved provisions to prevent any future confusion around policies relating to any flags at the stadium both with spectators and all staff who are employed by the stadium.

"This should include clear messaging to stewards regarding the club's policy on flags and the club's and Rugby League's commitment to inclusivity – including the Enjoy the Game campaign – and the right for spectators to respectfully promote this inclusion."

Hull say a rainbow flag continues to fly outside the KCOM Stadium and Radford expects Folau to be booed but only in the way that most away players are barracked.

"He'll get the same moans and groans as anybody playing for Hull KR would get I reckon."