There are growing calls for Kurtley Beale to be involved in this year’s spring tour and a subsequent reunion of the “Three Amigos” as the Wallabies aim to nail down their best fullback option two years out from the World Cup.

An injury to Tom Banks has opened the door for a number of individuals to possibly wear the Wallabies No.15 jersey this year, with half a dozen prospects who could feasibly play there at the 2023 World Cup. 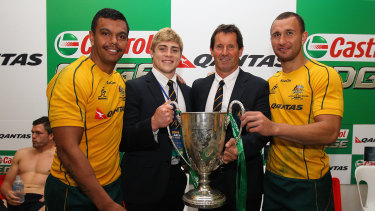 This week against Argentina, Reece Hodge has been given an opportunity at fullback after Banks suffered a broken arm against the Springboks which will keep the Brumby out for at least 10 weeks.

However, Banks is yet to lock down his spot at Test level and his injury will give Wallabies selectors the chance to look at other options.

Last week Wallabies coach Dave Rennie said James O’Connor could be used as a No.15 option but will be used off the bench instead in Townsville on Saturday. It would be no surprise to see him used at fullback during the year’s remaining Tests against Argentina, Japan, Scotland, England and Wales.

Jordan Petaia is viewed as a long-term No.15 by Wallabies coaches but hasn’t been given a chance there at Test level. That could come in a fixture against Japan next month in Oita if the Wallabies wanted to experiment.

With Dane Haylett-Petty now out of the Wallabies picture as a result of concussion issues and a looming contract in Japan, a left-field fullback option is Andrew Kellaway but his form on the wing will likely mean the Wallabies to keep using him out wide.

The other name being floated is that of Beale, who is playing for Racing 92 in France’s Top 14 competition.

With Cooper and O’Connor now back representing their country, the prospect of a reunion with Beale is not out of the equation. 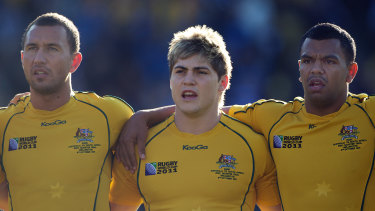 Beale, Cooper and O’Connor haven’t been in the same Wallabies XV since Australia’s third-place play-off match against Wales at the 2011 World Cup in New Zealand.

Former Wallaby Drew Mitchell wrote on social media this week that he’d love to see the trio back in action.

It seems Beale, a close friend of Mitchell’s , hasn’t been approached by Wallabies officials, a year after Rennie left him out his initial players of national interest list.

“From my conversations with Kurtley, he is super keen,” Mitchell said. “I think there was initial dialogue when Dave came in but he’s got a fair bit on his plate. I don’t know if there has been much in recent times. Kurtley is more than hopeful there are more conversations to be had.

“I spoke to him as regularly as last night [Thursday]. He’s loved every opportunity he’s had to play for the Wallabies and he would love nothing more than to get more of an opportunity. Overseas [based players] like Quade, [Samu] Kerevi, Izack Rodda … these guys have come in and actually added to the squad. He feels – and I also feel – that he’d be someone who adds to the squad.

“I threw a comment on the Wallabies [Instagram] page. Some of the replies were like ‘oh we’re going back in time … we don’t need Kurtley he’s too old’. Well Quade has come back and Quade [33] is older than Kurtley [32]. He’s got so much more to add to Australian rugby. 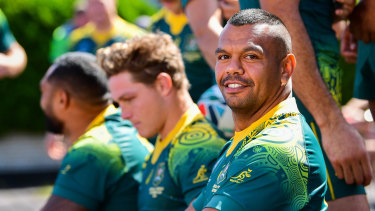 “When James came back, when Quade came back, people weren’t convinced until they went out there and performed. It’s almost like if they perform, people forget what those reservations were.”

Wallabies captain Michael Hooper is open to the idea of getting his former Waratahs teammate involved.

“I hear Kurtley’s been playing really well up in France,” Hooper said. “We’ve seen with some of the guys that have come back in recent times the value they’ve added. Kurtley, with ball in two hands, is unbelievable. If there’s appetite there from the coaching staff, I’m sure someone like that can add a huge amount to our team. In a COVID world, anything could happen.”

Beale hasn’t played a Test since Australia’s quarter-final exit at the 2019 World Cup. 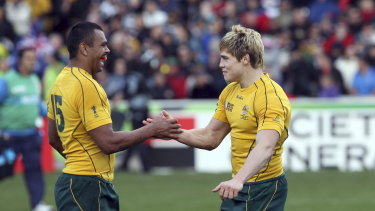 Cooper, Beale and O’Connor, all prodigious footballers in their younger days, were known as the Three Amigos before a number of off-field incidents caused unwanted headlines and resulted in multiple fines.

“I always keep in contact with Kurtley and I’m always interested to see how he’s going,” Cooper said. “He’s been a friend and a guy that is very well-loved by the Australian public and the players. He’s sent a few messages. It’d be great to be able to cross paths with him at some stage, whether that’s on the spring tour, if I’m lucky enough to be selected for that, or just back in Australia at a later date.”

Saturday will mark the first time Cooper and O’Connor have featured in the same Wallabies side since a 2013 Test against Argentina in Perth.

Just days after that match, O’Connor had his Australian Rugby Union contract torn up as a result of a an incident while intoxicated at Perth airport. O’Connor spent six years in the Test wilderness before returning to the Wallabies in 2019 at a time when Cooper was being overlooked by Michael Cheika.

Rennie has shown he is happy to bring back players for Wallabies duty in order to increase competition for spots. Beale, with 92 Tests for his name, is eligible to return and being based in Europe could help his cause.

Even if Beale doesn’t play on the spring tour, Mitchell believes there is merit in giving him and some other European-based players a Wallabies tracksuit for a few weeks.

“If they’re going to be up there, it’s a perfect opportunity for Dave Rennie to bring them in and have a look at them for three weeks of training if nothing else,” Mitchell said. “Sit down and have genuine conversations around aspirations, so Dave gets an understanding of them as people rather than knowing of them from afar.

“We’ve got to tap into that now so that next year or leading into 2023 there are no more question marks.

“I think these players coming back from overseas are showing they can come back and add to the current group. I’ve obviously been a big advocate of picking your best players. I don’t mean you’re going to fill your first XV with players from overseas, they could just be guys who come in and play a role in the squad.”