Collingwood defender Tom Langdon is contemplating retirement as he continues to struggle in his comeback bid from a degenerative knee injury.

The 25-year-old intercept defender was recently given the all clear by his surgeon to step up his running and he is still attempting to get his body into a position to resume his career. 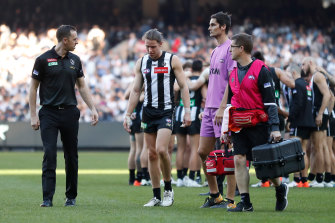 "But when you look at the sheer amount of time that's passed, and the fact the cartilage doesn't regenerate, it's a degenerative injury …

"'Langers' has been very mature about it, he's got a long-term perspective about what the rest of his life looks like as well. As he said last night, it's an option, but it's clearly not one he's prepared to concede at this point."

Langdon was one of Collingwood's best in the 2018 grand final loss and has been a consistent reliable performer for the Magpies in defence since 2014.

He considered offers from Sydney and Fremantle at the end of 2018 but decided to stick with Collingwood, however, he suffered a season-ending knee injury against St Kilda in round nine last season.