Between the passing of the Queen, the impending arrival of Joe Daniher’s first child that meant he withdrew from this game and the occasion of a cut-throat final, this was a day of life, death and everything in between.

OK, there were no taxes, other than the extortionate levy on finals series tickets. But there were other verities. A dependable one this season is that Melbourne beats Brisbane, and by a wide margin. This was how it was in the first quarter. Another is that Melbourne establish match-winning leads and give them up. That was the balance of the game.

Brisbane were left in the bitter-sweet position of rejoicing for Daniher the father-in-waiting while initially sorely missing Daniher the footballer. He is not a superstar, but he is an awkward proposition for any defence, and has a knack of bobbing up at the right moment; ask Richmond. Without him, the Lions were like the crowd, thinner than last week.

But they had a Plan B. His name was Eric Hipwood, his sidekicks Dan McStay and the irrepressible Charlie Cameron. They stretched Melbourne defensive duo Steven May and Jake Lever to breaking point. This could be seen in the last significant play of the match when Lever gave up a doubtful free kick to McStay, then in his annoyance was slow to hand back the ball and was penalised 50 metres. 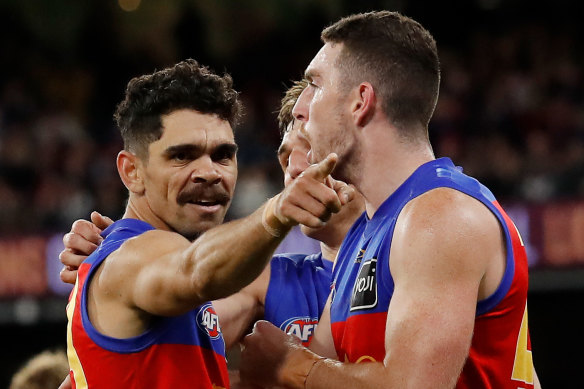 The worth of this win cannot be underestimated. The Lions had lost their previous 11 games on the MCG; they had not won there in the Chris Fagan era. They were absent not only Daniher, but ruckman Oscar McInerney, defender Marcus Adams and midfielder Jarryd Lyons. And they were five goals behind. To maintain their composure from there and forge a win required royal poise indeed.

To begin, Melbourne ticked the boxes. Christian Petracca did not appear particularly inconvenienced by his technically broken leg. Angus Brayshaw kept the sort of vigil on Lachie Neale that Richmond eschewed last week, to their own cost. Dev Robertson and then Jarrod Berry kept an equal and opposite thumb on the prolific Clayton Oliver.

But Melbourne’s passage into their forward line has been its Achilles heel all season, and as the Lions neutralised the game in midfield, it began to ache. Max Gawn began with a rush, but a corked thigh left him a cylinder short of full power. It would prove telling. One by one, the Lions unticked those boxes.

Now the second great truism of the season became the prevailing dynamic. That is Melbourne’s propensity to dominate games early, establish big leads and fritter them away.

Conversely, the Lions have a modestly happy history of winning from behind. From 28 points behind, they kicked five goals in a row to square the match, then square it again after Melbourne found a couple of opportunist goals. They were rocks in the millstream.

In a tale all too well known to Melbourne, the flow of the match wholly reversed. The Lions seized control in the midfield, their tackling brought rich rewards and their forwards found avenues to goal. Melbourne found avenues only to behinds, and sometimes not even those. The Demons frequently lament their lack of connection from midfields to forwards. Now they might as well have been on different planets.

This was a markedly different occasion to last week’s series of thrill-a-minute finals. The crowd was smaller, but no less hype and the atmosphere even more urgent. Strictly in football terms, this was all about mortality. 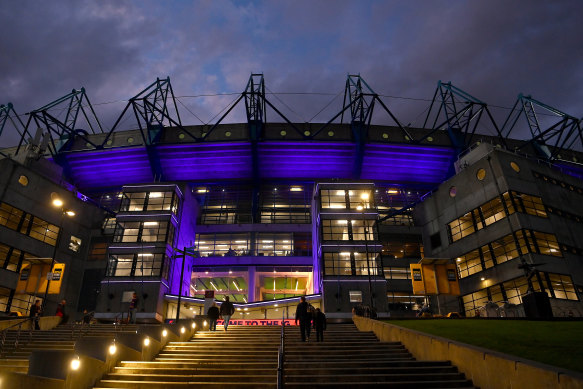 The MCG is lit up.Credit:Getty Images

The MCG was lit up in regal purple, as it will be throughout the mourning period. The match was preceded by a simple ceremony, incorporating the now standard indigenous welcome to country, the British national anthem and a rendition of the Australian anthem sung by Delta Goodrem, who was received as rapturously as any match-winning goal-kicker. Dare we say it, she’s Australia’s Queen of Pop. Between the two teams sat a bouquet of flowers.

So was the Queen’s passing commemorated. The rest of the night was about metaphorical life and death. The Demons will be alive surely enough when they wake up on Saturday morning. But they will be dead in their hearts.