At the beginning of season 2022, the Brisbane Lions promised a new look to their midfield. Cam Rayner, the former No.1 draft pick now in his fifth year, would play more minutes in there; so too half-forward Zac Bailey. Former Geelong player Nakia Cockatoo, whose career had been crippled by injury, was finally fit and ready to explode.

It hasn’t quite worked out as planned. Cockatoo has played just the eight games, mostly off half-forward and half-back, failing to make an impact. He was omitted again for Sunday’s match against Carlton. Bailey still plays mostly at half-forward, so to the dynamic Rayner, who has looked good in patches but has not developed as quickly as hoped. 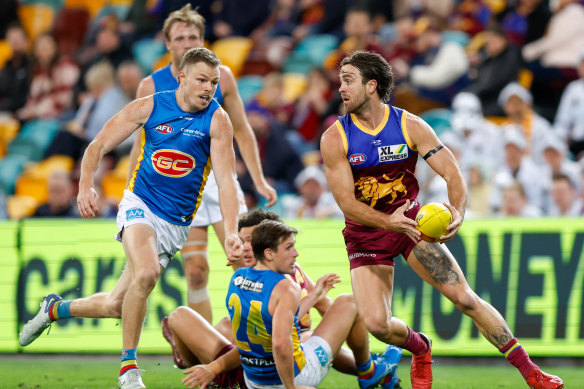 Rhys Mathieson has made an impact since returning for the Lions.Credit:AFL Photos

To be fair to Rayner, he missed all of last year due to a knee injury. But the Lions are still searching for the right balance. After being beaten up around the ball for several weeks leading to a 10-point loss to Essendon at the Gabba in round 17, the Lions finally introduced their own self-proclaimed “beast”, Rhys Mathieson.

Until then, Mathieson had spent the entire season in the VFL, where he was racking up enormous numbers. “The mix we had in there was probably around JL [Jarryd Lyons] and Lachie [Neale] being our grunt players,” says Lions football manager Danny Daly. “We didn’t want to have too many bulls and not enough spreaders.”

The Lions midfield is small. Neale stands at 178 centimetres, captain Dayne Zorko – moved to half-back for much of the year, where his kicking and quick decision-making is an asset – is 175cm. “Rhys isn’t tall in stature but he’s a big body, and sometimes big bodies are just as important as taller bodies,” Daly says.

Size does matter, at least when you come up against the likes of Christian Petracca and Clayton Oliver: in the round-15 game against Melbourne, Daly admits the Lions were “semi-bullied” around the contest. “We felt like we needed that extra bull and we could make up for the run on the outside. So our philosophy changed.” 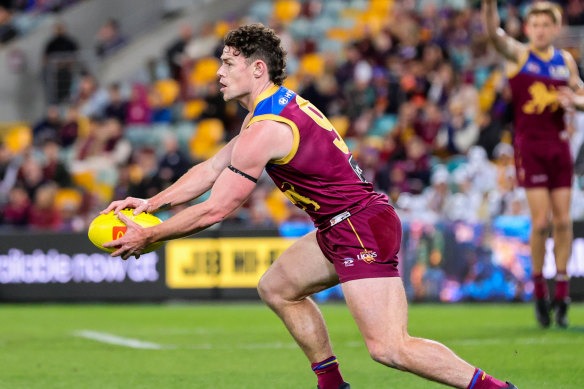 Lachie Neale gets a kick away against Gold Coast.Credit:AFL Photos

Simon Black, the Lions’ triple-premiership-winning midfielder, Brownlow and Norm Smith medallist, says the Lions need a harder edge. “Brisbane’s not big physically, they’re not imposing. It’s not to say they can’t beat Melbourne’s midfield, but they’ve got to be aggressive. They’ve got to be physical.”

For this reason, he loves Mitch Robinson’s aggressive approach: “I almost feel that for the Lions to win it, they need him in the side, playing his best footy. He adds a different dynamic to that midfield group.” But Robinson, who played his best football on a wing in 2019, was dropped again for Sunday’s clash; at 33, his career is probably in its final stage.

Another issue for the Lions is Lyons. “His form hasn’t been anywhere near previous years, and if you’re talking about a premiership tilt, that’s concerning. He’s been important for them and premiership years need a bunch of guys playing career-best seasons,” Black says. Daly denied that Lyons was carrying an injury. 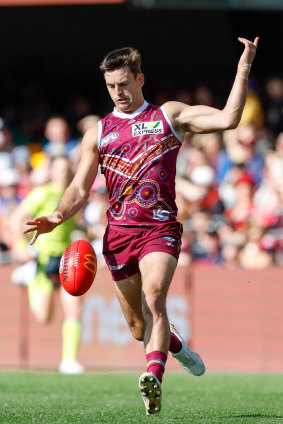 The Lions have explored some other personnel options. Jarrod Berry has played more often on a wing, but at other times has been used in a tagging role, in which he has been effective. After excelling on a wing himself, Hugh McCluggage has developed his inside game and is playing more in the centre.

But the central problem remains: Neale isn’t getting enough help, and the Lions need to lift the defensive side of their game if they’re to take the final step from top-four side to premiers. This is their fourth year in contention, and expectations have changed. “You really are comparing them with the cream of the competition,” Black says.

In round 23, they’ll play Melbourne again, in what looms as an acid test of their mettle after the round-15 humiliation. They will need to show the same fanaticism that Collingwood showed on Friday night. The Pies were smashed in contested ball and around the clearances too, but their intensity helped blunt Melbourne’s effectiveness in transition.

“If they don’t win it, they’ve got to pressure Melbourne with every disposal they get out of the clearance,” Black says. “Leigh Matthews used to talk about it a lot, there’s clearances and there’s penetrating clearances, there’s a difference. That’s something Brisbane really need to get better at.”

Mathieson once gave himself another name, “The Barometer”. He’s made an impact in his three games since returning for the round-18 clash against the Giants, lifting the Lions’ contested ball and clearance numbers. If he’s to be the barometer of their fortunes, they’ll need him in full beast mode come September.