Testing time ahead: The British and Irish Lions were on easy street again against the Sharks, but the first real challenge for Warren Gatland’s side now lies in wait

The Lions settled into their remote, luxurious, biosecure coastal base outside Cape Town yesterday and began hastily preparing for what might become an unofficial first Test on Wednesday.

Following their 71-31 rout of the Sharks at Loftus Versfeld in Pretoria on Saturday night, the tourists escaped the Covid hotspot of Gauteng and flew south, minus five of their party who remain in isolation in Johannesburg.

Attack coach Gregor Townsend — Warren Gatland’s assistant — has to stay behind for a further 72 hours, along with a player and three other staff members. 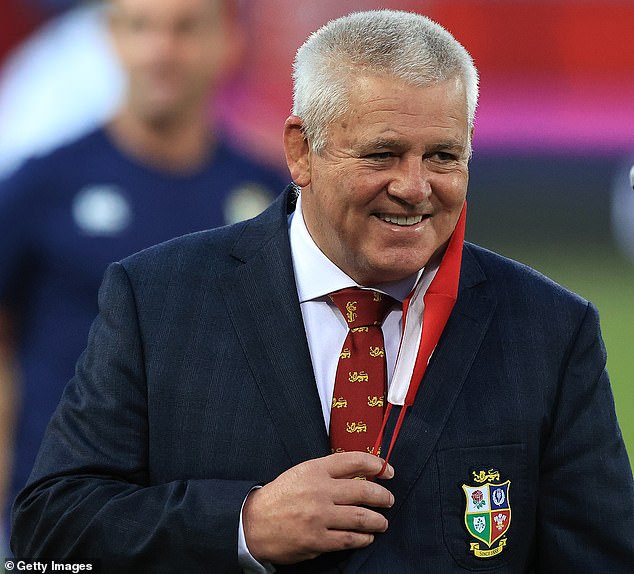 It is not what the Lions wanted, but they are learning to adapt to this virus-stalked crusade in South Africa. The next complication could be a steep rise in on-field intensity, given the way the schedule for this week is taking shape.

Gatland had thought that fixtures might be switched so that his squad would take on the Stormers in their next outing, but instead they could be confronted by a shadow Springboks side, in the guise of South Africa A.

The Boks emerged from their six-day lockdown to resume training yesterday, despite the outbreak spreading to captain Siya Kolisi and five of his team-mates.

There have now been more than 20 positive cases in the home camp, with Kolisi joining head coach Jacques Nienaber in being withdrawn from hands-on duties.

But Sportsmail understands that 36 players were available for training on Sunday, and, provided further tests come back negative, their fixture against the Lions on Wednesday will go ahead.

Nominally, it will be South Africa A, but it is likely that many senior men will appear under that banner.

After the second of their two warm-up Tests against Georgia was cancelled, the Springboks need game-time to establish some cohesion between combinations that have been mothballed since the World Cup triumph in 2019.

Influential figures such as Sale scrum-half Faf de Klerk and Toulouse wing magician Cheslin Kolbe have not represented their country since their night of glory in Yokohama 20 months ago, so it would be logical for Nienaber to want to give them a run-out.

The A team will be drawn from the Springbok squad, so it could be a powerful, dangerous line-up.

The Lions have been crying out for meaningful opposition to help them fine-tune for the Tests, so their wish is set to be granted.

South Africa were keen for their A team — or shadow Bok XV — to play a second game against the tourists on Saturday, in place of the scheduled Stormers v Lions fixture, but the visitors were not willing to agree.

So Nienaber is bound to see Wednesday’s match as a valuable hit-out, which raises the stakes considerably. Gatland must decide how to handle the possibility of a near Test-level contest.

There have already been selection puzzles due to Covid and competition for places, but now the Kiwi must also consider whether to show his hand, 10 days out from the series opener.

It is about deciding whether the priority is to maintain momentum by picking the strongest Lions team or to create confusion in the rival camp by rotating and experimenting again.

Gatland is a pragmatist, so there is every chance he will accept the threat of a jarring defeat in order to hone his selection thinking for the business end of the trip.

There is surely sense in the head coach keeping some cards close to his chest and keeping the hosts guessing, to deny them a close-up sight of his possible Test line-up.

Then he can unleash the ‘gun’ XV against the Stormers on Saturday, a week before the first clash with the bona fide Boks.

The other issue is that Gatland may not be sure what his best team is anyway, given the number of contenders who have delivered compelling auditions.

Ireland flanker Tadhg Beirne is in that category after his two-try contribution against the Sharks. He said afterwards: ‘We’ve had some serious wins. We’ve had three wins over 50 points, which is pretty impressive.

‘There’s certainly a bit of momentum but challenges are going to get more difficult. It’s an exciting few weeks ahead. Hopefully we’ll be able to keep improving.’

Asked how players will feel about the tussle for Test selection, he added: ‘Probably a lot of mixed emotions, really. Of course you’re going to be nervous and anxious, but excited at the same time. All you can do is put your best foot forward. From that point, it’s out of your control.

‘As a player, it’s not my decision whether I get selected or not. I’m going to do the very best I can to give Gats that headache and hopefully, come Test week, I’ll be on the team sheet.’

Kolisi and the other isolating Springboks will hope they are cleared to return to training next weekend and that they can prove they are ready to face the Lions.

Nienaber is staying in contact with fellow coaches via Zoom and WhatsApp. In his absence, South Africa director of rugby Rassie Erasmus is overseeing training. He masterminded their World Cup success, so even in these trying times they are in good hands.