Six thousand, two hundred and three days. And counting. The wait will continue for at least another year for Essendon, whose finals win drought will extend to 18 years and whose season is over after being outclassed by the Western Bulldogs in a drenched Launceston on Sunday.

The Dogs, having slipped out of the top four with a late-season capitulation, still have the chance to again defy the odds and win a premiership from an elimination final. The road ahead is arduous and circuitous though, via Brisbane, Adelaide and almost certainly Perth. 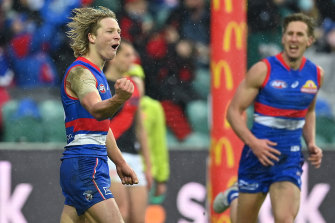 Cody Weightman of the Bulldogs celebrates kicking a goal.Credit:Getty Images

Luke Beveridge’s side withstood an early period of ascendancy from the Bombers, with the Dogs grinding their way to a narrow half-time lead by virtue of neater finishing in front of goal.

The game slipped from Essendon’s grasp during a three-goal-to-nil third quarter. The hero for the Dogs – and certainly the villain for the legions of Bombers fans watching either at UTAS Stadium or back in locked-down Melbourne – was 20-year-old Bulldog small forward Cody Weightman.

The goalsneak snared four majors, all from free kicks, two to generate breathing space after half-time. Essendon fans were spitting blood in their lounge rooms, particularly on the back of Weightman’s fourth goal, bent from the pocket after what looked like pretty reasonable contact from Zach Merrett. 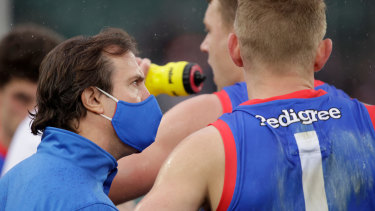 Luke Beveridge speaks to his players.Credit:Getty

There are days when the umpires go largely unnoticed. This was not one of them.

But the Dons could not blame this defeat on the officiating. They failed to take advantage of their early control, with Dylan Shiel dropping a sitter at full-forward and Aaron Francis failing to convert the follow-up chance.

The Bulldogs sprung a pair of late changes, with defender Ryan Gardner replacing the unwell Zaine Cordy and Josh Schache upgraded to the 22, demoting Jason Johannisen to the role of medical sub.

Gardner did a solid job on Francis but will be looked at by the match review officer for a high hit off the ball which felled the South Australian in the dying stages of the third quarter.

Schache stood up when needed, taking advantage of his opportunities.

Peter Wright, the match-winner when these teams met three weeks ago, was comprehensively beaten by Alex Keath in the wet, while Jake Stringer kicked two goals to bookend the first-half scoring but was otherwise quiet.

In conditions highly suitable to his style, Tom Liberatore was the Dogs’ most consistent midfielder across the afternoon. Marcus Bontempelli was a slow starter but worked his way into game well. Aaron Naughton wasn’t much of a factor until the game was already won, but he helped pile on the goals late.

The margin ultimately stretched beyond eight goals as the Dons became the first team in 65 years to go goalless in the second half of a final.

Beveridge will, however, surely need to think long and hard about persisting with Lewis Young in the ruck after he was thrashed by Sam Draper.

Love the one you’re with

Ten months ago, Essendon wanted Josh Dunkley and Dunkley wanted to become a Bomber. The problem was Dunkley was contracted, and the Dons were unwilling to pay the price to move him from Whitten Oval. They didn’t know it at the time, but Essendon probably got lucky. It will remain an unanswerable hypothetical of just how much midfield time Darcy Parish would have been granted this season had Dunkley joined Jye Caldwell in arriving at Tullamarine during the trade period. But it doesn’t take too much of a stretch to think Parish would not have enjoyed nearly as much of a run in the guts. 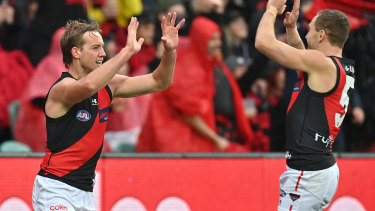 Parish was named in the All-Australian team on Thursday night, and will probably win the Essendon best and fairest, and was huge again on Sunday. His second quarter in particular was something to behold: 16 disposals, six clearances, one goal and one goal assist.

Dunkley, meanwhile, has struggled to make much of an impact since returning from injury late in the season, and was quiet again in the first half on Sunday.

Ironically Beveridge sent Dunkley to Parish after half-time, a successful move that helped the Dogs break away in the third term. Dunkley is still only 24 and could yet have many good seasons ahead of him. But Parish’s season is a reminder for clubs that sometimes improvement comes from players already on your list, rather than a shiny new toy from elsewhere.