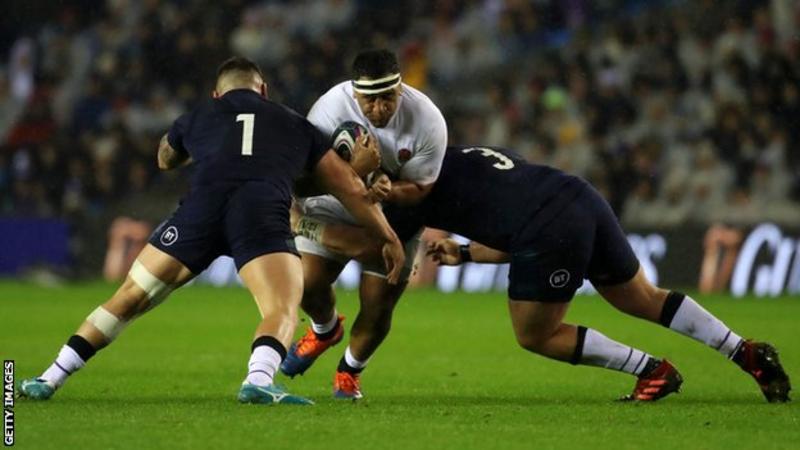 Prop Mako Vunipola is training with his club Saracens, despite being stood down by England over coronavirus fears.

The Rugby Football Union confirmed on Tuesday Vunipola was not available for Saturday’s Six Nations game against Wales after he travelled through Hong Kong last weekend.

An RFU spokesperson said Vunipola was “not sick” but was not in camp “on medical grounds”.

However, he is available for Sarries’ Premiership match with Leicester.

The confusion centres around differing interpretations of the governmental guidance for those potentially affected by the coronavirus outbreak.

Vunipola spent much of the past fortnight in Tonga attending to a family illness, missing England’s victory over Ireland on 23 February.

He returned to the UK via Hong Kong, an area which has been hit by the virus since January.

Guidelines say those who have travelled from places such as Hong Kong should self-isolate if they “have a cough, high temperature or shortness of breath”.

While the RFU medics took the precautionary measure not to have Vunipola involved this week, he has not shown any symptoms.

Therefore Saracens feel Vunipola, along with brother Billy, are both safe to return to the club’s training base in north London.

Saracens said the Vunipolas made a “short stop” at Hong Kong airport on their return from Tonga.

“Travellers returning from Hong Kong are not currently subject to mandatory quarantine or self-isolation unless they become symptomatic,” the club statement added.

“Neither Billy nor Mako have displayed symptoms of coronavirus and on their return to London were assessed by the club’s medical staff.

“The duo have been around the Saracens environment for the past couple of days, with the latter available for selection this weekend.”

Saracens will continue to follow the Public Health England and World Health Organisation regulations surrounding coronavirus and the medical staff will be closely monitoring Billy and Mako on a regular basis.

Ireland’s game against Italy has been postponed because of coronavirus, but Six Nations organisers said on Monday that the rest of the weekend’s fixtures were currently set to go ahead.

Without Vunipola, England head coach Eddie Jones has streamlined his squad to a group of 27 players, with Exeter scrum-half Jack Maunder among those left out.