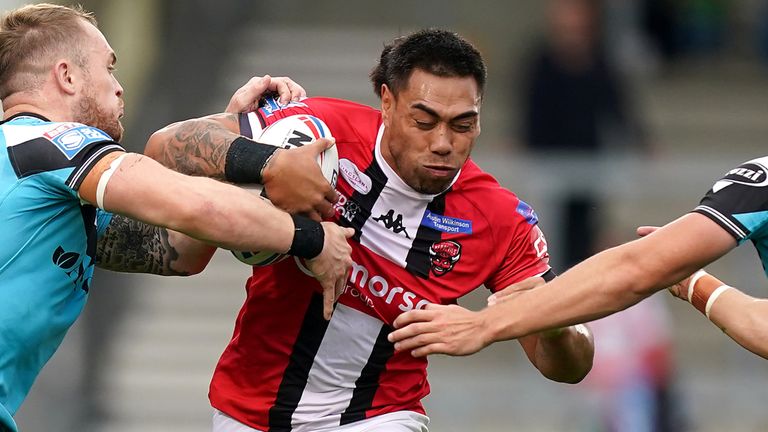 Sio crossed twice in both halves as Salford bounced back from two defeats in nine days in emphatic style, winning the contest 42-14.

Krisnan Inu weighed in with seven goals from as many attempts as Salford scored 28 points without reply in the final 22 minutes to run out comfortable winners. The result, meanwhile, leaves Hull with plenty to do as they seek a play-off place and the nature of their second-half collapse will be of huge concern to coach Brett Hodgson.

A dominant display this afternoon as your Salford Red Devils put 42 points past the Black and Whites!

Salford had lost their two games against Leigh Centurions and Catalans Dragons and the signs looked ominous when Hull scored after only four minutes. Loose forward Ligi Sao charged through with the Salford defence still struggling to get back from an earlier break by Connor Wynne and Marc Sneyd added the conversion.

Sio claimed his first try of the afternoon in the 13th minute after he was alert to a cut-out pass from Tuimoala Lolohea which left Hull short of numbers on their left edge. Inu added the conversion.

The home side were now the dominant force and were unlucky not to score in the 21st minute after winger Joe Burgess was inches short as he reached out to touch down following a high kick from Ata Hingano.

Sneyd and Jake Connor combined on the left side looking for Adam Swift but Sio came to Salford’s rescue with an interception attempt which, though unsuccessful, prevented what looked a certain try. Hull instead had to settle for a penalty goal from Sneyd after the hosts were penalised for offside in front of their own posts. Hull were on the front foot again thanks to Sneyd’s 40/20 kick, but they were unable to capitalise on the promising attacking position. Then with four minutes of the first half remaining, Salford went ahead in the most bizarre of circumstances.

With play appearing to be disappearing down a cul-de-sac on the last tackle, Dan Sarginson kicked the ball across to the opposite wing, where Sio was alert to take the ball then kick ahead and win the race for the bouncing ball to touch down. Inu added his second conversion to make it 12-8 to Salford.

On the stroke of half-time, Sio was not far off claiming a hat-trick when Hull had to scramble the ball dead for a drop out after a teasing kick from Lolohea.

The visitors regained the lead eight minutes after the restart. A grubber kick from Sneyd took a wicked bounce off the padding on the upright and sat up perfectly for hooker Danny Houghton to touch down under the posts. Sneyd’s conversion gave Hull a 14-12 lead which they held for 10 minutes. 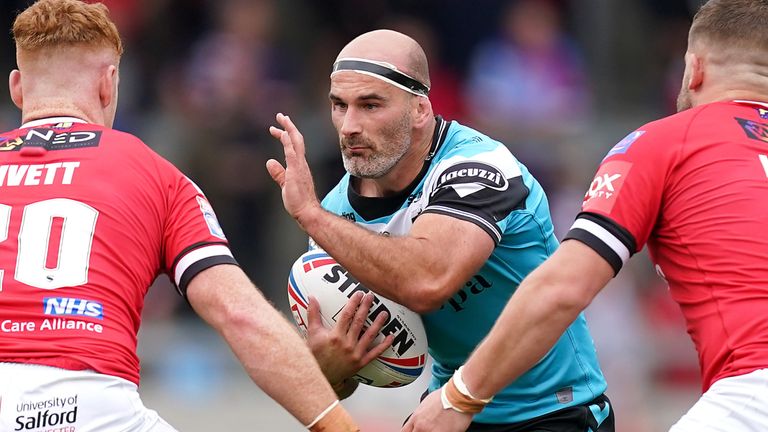 After surviving a drop-out and two six again klaxons Hull’s defence finally succumbed in the 58th minute when stand-in Salford hooker Chris Atkin spotted a gap from dummy-half and shot through for a try which Inu converted to make it 18-14 to home side.

With 13 minutes remaining, a kick to the corner caused panic in the Hull defence and the ball was eventually grounded by Harvey Livett. Inu added the conversion and the floodgates opened.

Burgess produced a flying finish to score moments later, Inu again adding the extras and with eight minutes to play, Sio sealed his hat-trick with a stylish touchdown in the corner followed by another successful conversion.

With time almost up, a loose ball was scooped up by Inu and his pass sent Sio racing 80 metres to score in the corner. Inu’s goal – his seventh from seven attempts – capped a fine afternoon for Richard Marshall’s men.