Wests Tigers co-captain Moses Mbye's knee injury looks set to sideline him for round one but pave the way for teammate Josh Reynolds to nail down a bench spot.

Mbye suffered a suspected low-grade medial ligament strain to his right knee during the 20-6 trial win over the New Zealand Warriors. 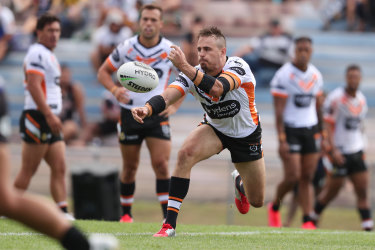 Josh Reynolds in action during the trial win over thje Warriors in Rotorua on Sunday.Credit:Getty Images

Doueihi could yet miss out entirely for the Dragons' clash, especially given he arrived at the club late and has spent most of his time training at fullback and five-eighth.

Speaking about Reynolds' effort against the Warriors, Maguire said: "I thought it was an improved performance from the week before, and the things I asked him to work during the week he did which was great.

Maguire added he could not fault the performances of his new recruits, including the Leilua brothers and Doueihi. He was particularly impressed with Leilua and David Nofoaluma's combination on the right edge.

While the Tigers spent the weekend in New Zealand, they also kept a close eye on their round-one opponents the Dragons, or more specifically new fullback Zac Lomax and how he fared a couple of times under the high ball.

The Warriors are also sweating on skipper Roger Tuivasa-Sheck, Agnatius Paasi and Kodi Nikorima, who all suffered minor ankle injuries on Sunday against the Tigers.

South Sydney lost impressive prop Patrick Mago to a pectoral tear, despite an impressive second-half effort in the Charity Shield where he scored a try and set up another.

Melbourne prop Nelson Asofa-Solomona is dealing with a hamstring issue and in some doubt to play Manly in round one, with Brandon Smith (facial fractures) and Christian Welch (knee) also out.