AFL chief executive Gillon McLachlan has again pledged the MCG will host this year’s grand final, as Victorian Sports Minister Martin Pakula ruled out a ‘no jab, no entry’ policy for crowds in September.

Pakula said it would be unfair to enforce crowds to get vaccinated in time for a grand final when “millions of people are not [yet] eligible” for a jab, and also said it was unlikely rapid testing would be deployed on the Melbourne sporting precinct for the AFL decider. 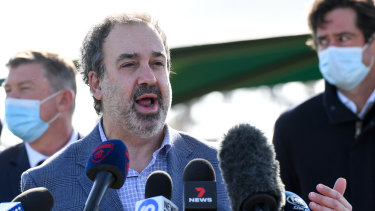 “You’d want to have a high degree of confidence about the accuracy of technology before you deployed it in an environment where there are tens of thousands of people.

“I’m not sure we’re at that point yet but it’s not something we’re ruling out. It’s something I think we need to investigate a bit more.”

McLachlan said there were temptations to use the pre-finals bye to re-shape the fixture after games in Queensland were postponed at the 11th hour on Saturday.

But he said the bye would give the AFL the flexibility it required to best cater for crowds come finals.

“To the extent we can preserve it for broader options, we will, and to maximise our crowds and the integrity of the finals series and to have the best grand final possible,” he said.

“Our commitment is to our clubs and all of our supporters that we’ve got flexibility and the ability to get through this.”

McLachlan said he was committed to honouring a contract with the state government to host the grand final at the MCG, but added that there would be flexibility if required.

“If we weren’t able to have crowds or execute on the agreement, I know we’d be able to have a productive conversation with the state government,” he said.

“We’re three or four weeks before the finals and I’m very optimistic on delivering on our contract for the MCG for Victorians.” 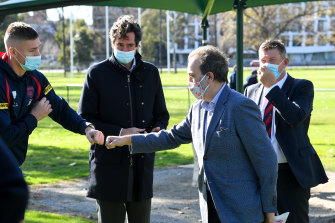 In fact, Pakula said it was possible the AFL might be able to host some crowds before the end of the home-and-away season, pending the loosening of restrictions next week.

Meanwhile, the Racing Minister added it was too early to know whether the Victoria Racing Club’s plans for 60,000 people at Flemington on Melbourne Cup day was realistic or not.

“It’s in the same realm as all of the other questions about crowds and sporting events. The VRC will have their ambitions,” Pakula said.

“They will need to submit that as part of a COVID-safe plan. It will be assessed by the public health team and it will be dependent on epidemiological conditions at the time. The spring racing carnival is three months away.

“A lot can happen between now and then. A lot.”

As part of the redevelopment at Gosch’s Paddock, the oval’s dimensions will be increased to better match the measurements of the MCG and Marvel Stadium, with lighting improvements and behind-goal netting and camera posts to be installed. The ground’s bearings will change so as to protect the trees in the precinct.

The state government is committing $2 million towards the project, with the AFL and Melbourne Football Club contributing $1 million.