Having started the season doubting whether he wanted to remain at Essendon long-term, Zach Merrett ended 2021 with a third best and fairest crown as well as being tied to the club for the next six years. 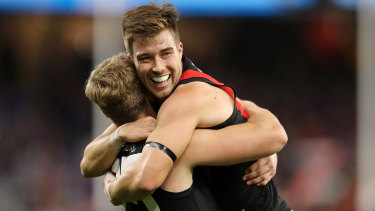 The star midfielder had previously won the award in 2016 and 2019. Merrett earlier this year signed a six-year contract extension with the Dons.

“There’s no doubt Zach took his game to another level this season and we commend him on his attitude, commitment, leadership and drive to again put together another outstanding year individually,” Essendon coach Ben Rutten said.

“Zach is a strong competitor who demands the best out of himself and his teammates in his determination to take this club forward.

“We know he will continue to lead this young group over the years to come and it’s terrific to see him being rewarded for his campaign this season.”

Fellow onballer Darcy Parish finished runner-up on 339 votes after a breakout season in which he finished fifth in Sunday night’s Brownlow Medal.

Small forward Will Snelling’s ascension continued, with the former Port Adelaide player placing third in the Dons’ count, held as a virtual event.

Jayden Laverde, switched to defence this year, was named the club’s most improved player on a night he finished sixth in the best and fairest.