Munster showed the benefits of his work with the pair in the Storm’s 22-14 win over North Queensland Cowboys in a trial game at Casey Fields on Saturday. 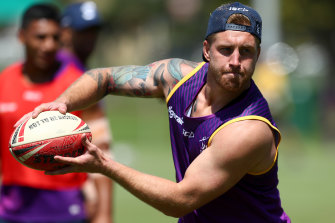 Cameron Munster has spent the off-season refining his craft.Credit:Getty Images

Retired Storm and Sydney Roosters playmaker Cronk is already on the books with the Roosters and AFL club Greater Western Sydney Giants as a skills coach, but Munster reached out to him for help, and has reaped the benefits.

"Cooper has been an integral part of this club for a long time, it would be stupid not to pick his brain for how he got into games as a half and what he did in games management-wise," Munster said.

"He's only a phone call away for all of us. He won't chase us, but if we ask for his opinion he's happy to give it to us.

"I'm not sure what [official arrangement] we have with him. He's on board with the Roosters with their halves. He does a little with us but as the professional Cooper is, whatever we speak to him about he won't talk about it to anyone else."

McRae has worked with the Storm's kickers for several years while working with Collingwood as an assistant coach and with Richmond, where he is now the forward coach.

"Craig's won premierships and coached with Damien Hardwick at the Tigers. They have a method and want to use that," Munster said.

"They are great players in the way they kick the ball, it's efficient. I know our game is different to theirs, but there are still similarities in our kicking."

Munster is also optimistic he and halfback Jahrome Hughes can improve as the team's playmakers, even as both had hands in the majority of Storm tries on Saturday.

"We are not going to sugar-coat it, me and Jahrome can get a lot better," Munster said.

"We still have the best player in the game giving us the pill [hooker Cameron Smith], and if me and Jahrome can connect a bit more we will create a lot of opportunities."

Smith will captain the side for the 15th consecutive season, with Jesse Bromwich and Dale Finucane his vice-captains. Kenny Bromwich and Sandor Earl round out the leadership group.

The Storm also announced on Sunday they had signed RedZed Lending Solutions as their front of jersey sponsor for the next two seasons with an option of extending the deal.

Munster is embracing his place as one of the middle men between the young players and the veterans, but he won't hide his larrikin streak with coach Craig Bellamy.

"Not at all, I'll keep pranking him until he retires," Munster laughed.

The Storm begin their NRL season against Manly in Sydney on March 15.