Melbourne Storm star Cameron Munster starred and Valentine Holmes scored his first try back in the NRL as the Storm beat the Cowboys on Saturday.

Australian and Queensland playmaker Munster had a hand in three tries as the Storm claimed a 22-14 victory in their trial game at Casey Fields, Cranbourne, with a crowd of 6120 turning out in the supposed AFL heartland.

The Storm fielded their strongest available side and lead throughout, although star Cowboys recruit Holmes scored his first try since returning to the NRL from his season with the NFL's New York Jets, chasing down a kick to score in the second half. 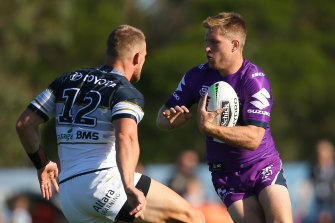 What will please the Storm is the manner in which both Munster and half-back Jahrome Hughes created opportunities for their teammates, as Hughes put in the passes for first-half tries to Justin Olam and Harry Grant before scoring a try of his own in the second half.

Kyle Feldt, Justin O'Neill and Holmes were the try-scorers.

Starting prop Nelson Asofa-Solomona (hamstring) and reliable prop Christian Welch (knee) missed Saturday's game as did Brandon Smith (facial fracture), and it’s unclear if any of them will be available for round one on March 15.

But if they can't return, Fijian prop Tui Kamikamica impressed in the starting prop position and reserve hooker Harry Grant made an impact when he replaced skipper Cameron Smith 30 minutes into the game.

Grant scored a try and put in a kick for Dale Finucane to score, but otherwise he was strong around the middle.

Grant looks a likely inclusion for the early rounds with Smith tipped to miss the early games.

Holmes showed he still has his pace with a speedy kick chase from a well-placed kick by half-back Michael Morgan. That link-up should be the first of many this season.

Holmes was also active in attack, regularly running onto the edges and making the defence adjust.

But the Cowboys will be a little concerned by the ease with which Melbourne attacked their middle and right side of their defence in the first half.

The Storm did dominate possession and push them deep into defence, but after falling to the lower tier of the ladder last season, the Cowboys know they can’t afford missed tackles and line-breaks.

The Storm’s bench positions remain in play, with Nicho Hynes still pushing for the 17th-man spot and a host of forwards making their case.

In the centres, Olam looks likely to keep his spot alongside winger Josh Addo-Carr after a powerful defensive performance and some hard running including the opening try.

The Storm will host their family day at Federation Square on Sunday and they are tipped to make a major sponsorship announcement and reveal their leadership group behind skipper Smith.