Dublin: Mark Nawaqanitawase has earned a surprise second start for a blockbuster Wallabies clash with Ireland but admits he nearly pledged his allegiance to Fiji earlier this year.

While the Wallabies won’t name their full team until Thursday evening, team officials have confirmed the Waratahs winger will once again take his place in Australia’s starting XV after debuting in a shock 28-27 loss to Italy.

Nawaqanitawase is poised to start on the right wing and is likely to mark former Brumbies player Mack Hansen who has certainly made a name for himself in Ireland.

“You’ve just gotta go with it. It’s just crazy,” Nawaqanitawase said. “It’s hard to think that at the start of the year, I wasn’t even getting picked [for the Waratahs]. I just debuted on the weekend. I’m still pretty lost with it all, but hopefully I’ll come around and get a bit more comfortable with it.”

It’s been some year for Nawaqanitawase, who plays his club rugby with Eastwood and became the first Wallaby from St Patrick’s College in Strathfield since Michael Foley’s 1995 debut against Canada at the Rugby World Cup in South Africa.

Way down the pecking order at the Waratahs heading into this year’s Super Rugby season, Nawaqanitawase forced his way into the NSW starting side before taking up a spot in Australia’s sevens team for the Commonwealth Games in Birmingham. 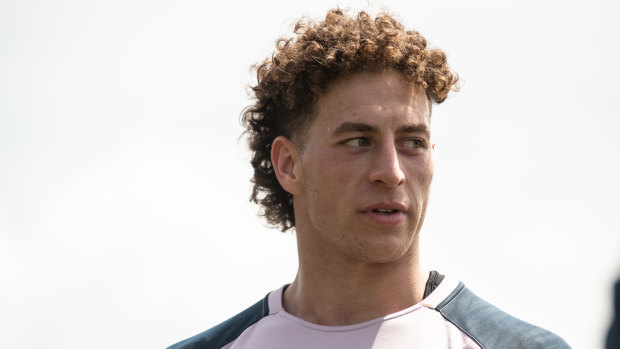 Mark Nawaqanitawase is set for his second start in a row for the Wallabies. Credit:Flavio Brancaleone

Auspicious performances for Australia A preceded an unexpected debut in Florence that went relatively well for the 22-year-old, despite the Wallabies losing to Italy for the first time in 39 years.

“I’m pretty chilled before games usually … but once I got to the anthem … I was a little bit nervous,” Nawaqanitawase said. “Once I got the ball and I was running around a bit, it kind of went away.

“I feel pretty confident already. Just making the tour I got a bit of confidence out of that. It’s pretty cool. But definitely playing adds a little extra and to see the competition that you go up against, you build that confidence the higher levels you go.”

However, a few months ago Nawaqanitawase, who has Fijian heritage, was no guarantee to wear a gold jersey if the chance presented itself.

“I obviously have that Fiji side to me, so it was definitely an option there,” he said. “I just had an open mind … it just didn’t work out eventually. There was definitely something there but I just chose to stay.

“I was at the point where I was playing a few games and I was just getting happy with where I was. I just thought I’d stick at it.”

Nawaqanitawase says a pep talk from Waratahs coach Darren Coleman was what he needed as his career arrived at a crossroads.

“When I had the chat with DC at the start of the year, when he told me that I was one of the last ranked, I was pretty shocked and lost,” Nawaqanitawase said. “I guess that kind of gave me a kickstart to do a bit more and try to change the tide a bit. 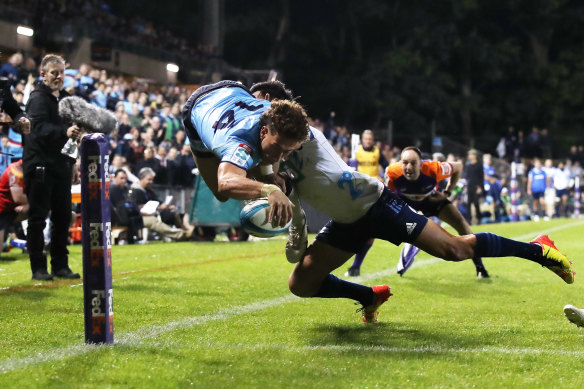 “I just had to work my way back and try and have a few good games.”

Tom Wright or Andrew Kellaway will play on the other wing for Australia this weekend in Dublin as the Wallabies look to snare a second win in their fourth match of the tour.

With Tom Banks out with an ankle injury – he is returning to Australia – either Kellaway or Jock Campbell will start at fullback.

One would expect returning No.10 Bernard Foley, who has never played with Nawaqanitawase, to attempt a handful of crossfield kicks to make the most of his aerial prowess.

In the dying moments of the Italy Test, Ben Donaldson kicked across to Nawaqanitawase but the ball sailed over his winger’s head.

From one debutant to another, it had the hallmarks of a memorable Wallabies moment had it come off.

“I was just thinking I was gonna catch it and score it but it didn’t work out,” Nawaqanitawase said. “It was on and I’ve got a good connection with Donno. A bit [more] skill execution was needed there. I know next time he’ll hit it and I’ll back myself to catch it.”

Watch all the action from the Wallabies Spring Tour with every match streaming ad-free, live and on demand on Stan Sport.