Mark Nawaqanitawase is in doubt for the Waratahs' clash with the Chiefs in Wollongong on Friday as the young attacking weapon battles a back injury.

Nawaqanitawase was pulled from his side's five-try win over the Lions at Bankwest Stadium last week just a couple of minutes into the second half. 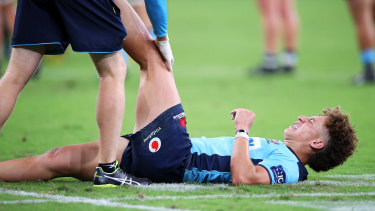 "We can't afford to make an ill-directed chip or grubber kick against them because that will feed into their counter-attack strategy. That's one element we need to make sure we're not loose on this week."

Penney could have been referencing some risky options taken by Harrison, who otherwise put in an assured and creative performance off the back of the Waratahs' ball carriers and halfback Jake Gordon's direct play.

The young playmaker has been working closely with attack coach Chris Whitaker, Hunt and Beale, and there were shades of Beale in an ill-timed grubber in the second half. Penney does not want to hamper Harrison's instincts, however, rather fine-tune them.

"They’re all learning opportunities for him," he said. "He’s got to continue on the path that he’s on because it's continually reviewing what he’s basing that decision on, what’s he seeing at the time, what information is he getting from others, and all that culminates in his game understanding and game growth."

Friday's match could see the debut of overseas signing Siosifa Lisala, who has been making his way back with the Waratahs A team after a calf strain. He will go up against Junior Wallabies winger James Ramm, who impressed with a try on debut against the Lions.