Tom Liberatore says missing family has been the toughest part of life on the Western Bulldogs’ heavily quarantined road through September, but the absence will be worth it should he enjoy a second premiership.

Quirky, quick-witted, tattooed and different, Liberatore is one of the first names, arguably behind only superstar Marcus Bontempelli, who springs to mind when the Bulldogs are mentioned. 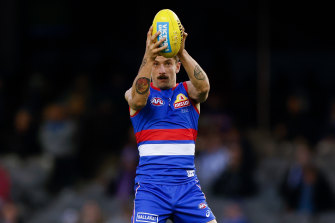 Tom Liberatore says missing his family has been the hardest part of a long stint on the road.Credit:Getty Images

He is a throwback to the Dogs of yesteryear, ready to scrap and verbally joust for any advantage, yet he also has the gold-plated skills needed to thrive as an elite midfielder in this professional age.

He also has a softer side, and being away from partner Malia and their two young boys, Oscar and Lotus, coupled with living in quarantine for a month, has been difficult. Now a veteran player, Liberatore also sympathises with supporters but understands what needs to be done.

“It’s been challenging at times with the travel and all that sort of stuff,” Liberatore said, relaxed while watching an NFL match.

“Personally, it’s hard being away from family and kids. Most blokes would probably say family and friends, they are the big two.”

He said there has been plenty of FaceTime but it doesn’t compare with what he and the family enjoyed through the Bulldogs’ glorious 2016 finals run, which culminated in the end to a 52-year premiership drought.

“Looking back to 2016, that’s certainly frustrating. You can say it’s sad as well, especially for supporters, this being only our fourth or fifth grand final. That would certainly dampen the spirits a bit, but you have got to look to the positives,” Liberatore said.

Those positives include three wins on the road against Essendon, Brisbane and Port Adelaide, which has left the Bulldogs on the cusp of only the club’s third premiership. Levity has also been needed through this time, and the way the Dogs celebrated post match with beer in hand against the Power highlighted the bond this club has.

Liberatore has been known as a prankster but said Ed Richards now “brings most of the entertainment” and Jack Macrae “is quietly a funny bloke as well”.

“They are the two that have certainly got me covered,” Liberatore said.

“I think I am on the list for entertainment, not to actually play footy. Hopefully, I will stick around on the list ’til I am about 40, get paid a pittance just to make jokes.”

Liberatore has long been considered the worst dresser – “that’s a fair call” – but said he was “slowly getting better with age”.

“I have got matching socks for a start, that is probably the big one,” he quipped.

He also said there won’t be a repeat next Saturday at Perth’s Optus Stadium of the panicked moments in the MCG dressingroom before the ’16 grand final when he realised he had forgotten his boots. Former teammate Shane Biggs repeated the tale on The Front Bar, recalling that Liberatore had a visiting housemate hurriedly bring the boots to the ground.

And that wasn’t the only quirky moment of that afternoon, for after the siren, complete with the premiership medallion draped around his neck, Liberatore joked with a fan that he had just scored a century and won the Ashes.

There was also an emotional embrace with father Tony, the Bulldogs great who twice fell just shy of a grand final. By Tom’s own admission, the pair has had an “up and down” relationship, but Tony couldn’t be happier for his son.

“I have certainly got him covered for the rest of my life. He is not catching me,” Liberatore joked of the grand final count.

“Nah, nah, he is good. He is pumped. He is probably more of a supporter, he gets pretty excited. I don’t think my little brother likes watching games with him at home, he goes and hides in the other room because dad’s a bit of a lunatic when it comes to that.”

Well-wishes aside, Liberatore knows there is work to be done. Club legend Doug Hawkins and Biggs say “Libba” is arguably the key to a Bulldogs’ victory, in a midfield that has begun to enjoy the craftiness it had earlier in the season.

“Thanks Dougie, you’ll make me get a tag now,” Liberatore quipped. He then added on a serious note: “it’s obviously a massive compliment. I am pretty humbled to hear that.”

The moustached left-footer is very much in the engine room, and that was seen early against Port Adelaide in the preliminary final when his stoppage work was instrumental in the Bulldogs all but ending the contest in the first term. He wasn’t afraid to get verbal with opponents, and that’s likely to be the case against the Demons.

James Harmes tagged Liberatore in round 11 and held him to 16 touches in the Demons’ 21-point win. Liberatore, however, rebounded when they met again in round 19, motoring from stoppage to stoppage and finishing with 27 disposals in the Dogs’ 20 point win. This time, the tagging role could go to Jack Viney.

“It seems like that is their plan going into the game,” Liberatore said of Harmes.

“They [Demons] have had an outstanding year. They have a consistent midfield and their forward pressure is, obviously, one of their strengths. That’s what got us in the first game, they dumped us a bit and the way they played and defended the ground, it was hard to get the game back on our terms. We have got to start well and match the pressure early.”

A fortnight after the ’16 success, Liberatore was pictured in Vietnam getting a whacky haircut and footage showed him in action for Macau in the AFL Asia Championships.

This time around, should the Bulldogs prevail, there won’t be an overseas sojourn. The pandemic has seen to that, but, at 29, Liberatore also knows where he really wants to be.

“I’ll be happy to head home and see the kids,” he said.