Dublin: Wallabies coach Dave Rennie has dropped Jock Campbell and reinstated Andrew Kellaway at fullback for this weekend’s match against Ireland as part of 10 fresh changes to Australia’s starting side since a nightmare loss to Italy that “let our country down”.

Rennie, who was criticised for making sweeping changes before a first-ever defeat to Italy, has brought back all his stars for a must-win game against Ireland.

The likes of captain James Slipper, Michael Hooper, Rob Valetini, Nic White and Bernard Foley have all benefited from a week of active rest before a blockbuster showdown with the world No.1 ranked side.

“There’s no doubt we’re playing the top side in the world,” Rennie said. “We let ourselves down and our country down. We’re keen for a response.”

Rennie said he was keen to give Mark Nawaqanitawase another game on the wing following a profitable debut in Florence, which has ultimately forced Campbell out of the match-day 23.

“Mark had a pretty solid debut,” Rennie said. “His aerial stuff is phenomenal on both sides of the ball. He’s a big man who has got a bit of post-tackle presence. We need to get him a bit of ball. 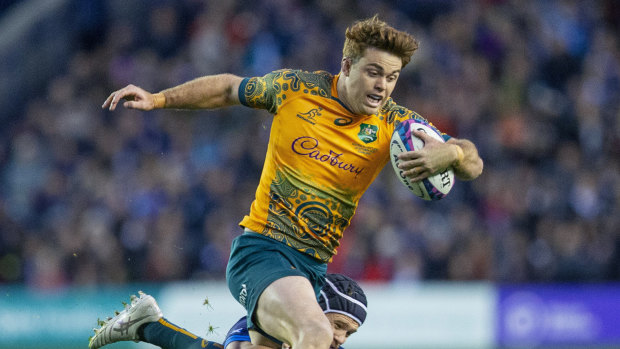 “Jock was nowhere near his best on the weekend. He was crook late in the week and he was probably a bit flat on game day. We still rate him. He’s certainly still in the reckoning for Wales.”

Despite suggesting earlier in the tour that Kellaway was better utilised as a winger, Rennie explained why he would wear the No.15 jersey instead of Campbell.

Tom Wright has been named on the other wing and rounds out Australia’s back three.

“[Kellaway] has attacked very well at 15 for us,” Rennie said. “We want to get Tom in and Mark on the field. We tossed up whether we played Tom at fullback or Kells. Tom and Kells are a couple of guys who communicate very well and have a good understanding of our system. They have good kicking games, which will be important.”

Will Skelton, who started against Italy, has been named on the bench.

It will be interesting to see whether Nick Frost or Cadeyrn Neville make way for Skelton when the giant second-rower comes on in the second half.

“With Nev and Frosty starting, it gives us a lot of lineout options with Jed Holloway there as well,” Rennie said. “Will off the bench hopefully gives us plenty of impact. It’s a strong bench with him, Taniela [Tupou] and Pete Samu to come on.” 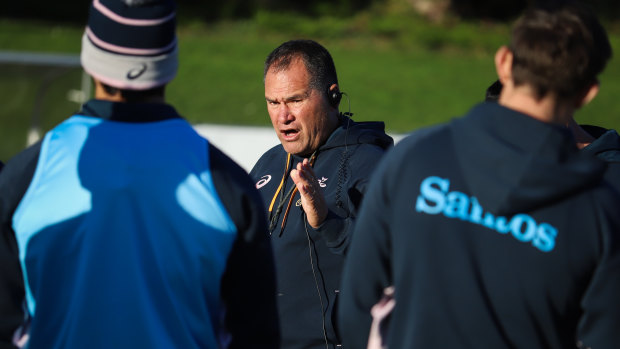 Allan Alaalatoa has been given the nod over Tupou in a starting front row featuring Slipper and hooker Dave Porecki.

Jake Gordon has won the race for the second halfback spot behind White and will feature on a 5-3 bench with Noah Lolesio and Jordan Petaia as the other spare backs.

“Both those guys have strong kicking games,” said Rennie of his halfbacks. “We expect maybe difficult conditions on the weekend. We think these two are the best suited for Ireland.”

Of the players who featured against Italy, Matt Gibbon, Darcy Swain, Ned Hanigan, Fraser McReight, Campbell, Lachlan Lonergan, Langi Gleeson, Tate McDermott and Ben Donaldson have all been left out.

The Wallabies have won just four of their 12 matches this year and should they fall to Ireland and Wales – the final two Tests of a five-match tour – it will consign the men in gold to their worst calendar year since 1958.

However, the margin of matches on this tour has been unprecedented. Never have the Wallabies been involved in three consecutive Tests with one-point margins.

Australia haven’t beaten Ireland in Dublin since 2013, while overall, the Irish have chalked up five wins in their last seven matches against the Wallabies since 2011.

Ireland are coming off victories against South Africa and Fiji. Andy Farrell’s men have not lost at home in 11 Tests.

“[Getting a response] is certainly something we’ve talked about,” Rennie said. “We’re still hurting from last weekend. We have to move on. The only way to do that is a response against the Irish. They’re an excellent side, very well coached and well-drilled.”

Meanwhile, Ireland No.10 Johnny Sexton has declared himself fit after a dead leg cast doubt over his availability.