Changes for both teams, and one big one for the Roosters

There’s a couple of big changes for both teams from the 1-17 named earlier in the week.

For the Raiders, Seb Kris is a late scratching meaning Jordan Rapana will shift to the centres and Semi Valemei coming onto the wing.

But the biggest omission is for the Roosters, with Jared Waerea-Hargreaves withdrawn from the team as he battles a couple of niggling problems – and apparently a TV cameraman – before the finals. Isaac Liu will move to the front row with Egan Butcher into the starting team at lock. Tearaway Naufahu Whyte has also been added to the bench.

How much will the big dog’s absence hurt the Roosters? 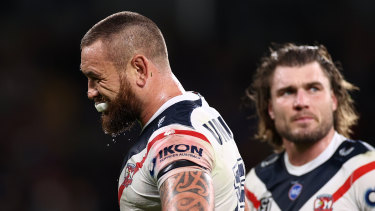 Jared Waerea-Hargreaves is a late scratching for the Roosters.Credit:Getty

Manu out, but how will the Roosters respond?

Joseph Manu – yeah, that bloke you might have heard about this week – won’t play for the Roosters until the end of the season after fracturing his cheekbone in that tackle from Latrell Mitchell.

But there’s a few huge inclusions for the Roosters tonight, Josh Morris, Matt Ikuvalu and Adam Keighran returning from injury while Angus Crichton is back from suspension. That’s enough to see them installed as favourites for the game as their own top four hopes go on the line. That’s highly unlikely though given they would need the Sea Eagles to go down to the struggling Cowboys.

Nevertheless, Trent Robinson is chasing a milestone of his own tonight as the first Roosters coach to win 150 NRL games. 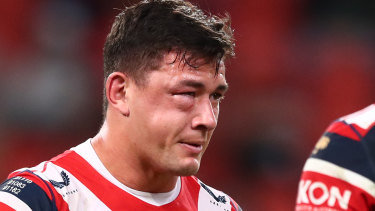 Joseph Manu with his cheekbone injury.Credit:Getty

Unreliable Raiders have one final shot

For those still wondering what needs to happen for the Raiders to make the finals this weekend: basically they need to win, and the Sharks need to lose to the under-strength Storm tomorrow night. That will be enough for the Green Machine.

But they’ve been about as reliable as the vaccine rollout this year; started with plenty of publicity, the wheels completely fell off in the middle months when the man calling the shots found it easier to be in England and then when all looked lost and it was a little late, they decided to get a wriggle on.

Will it be enough? I really don’t know, but I think they’ll need to be at more than 70 per cent to ease into the top eight.

Smell that? Yes, it’s spring, which means finals are approaching.

Hello, and welcome to the last Thursday night blog of the season (sad face). But at least that means we’re down to the business end of the season, when it’s a whole new competition, when you need to time your run, when the big-game players earn their keep and when it will always be decided up the middle.

But first, who’s going to make it? Well, tonight might go a long way to deciding that with the season of Ricky Stuart’s Raiders going on the line against Trent Robinson’s Roosters. You might have heard of them, been in the news a bit this week.

Anyway, welcome along. It’s going to be a beauty from Mackay. 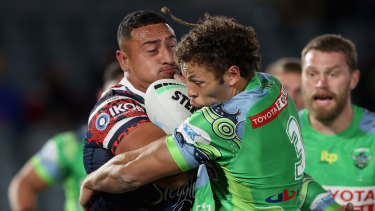