The NRL have defended having no representatives at St George Leagues Club for a private live stream of the funeral of immortal Norm Provan on Monday.

A week after the governing body slammed Penrith for disrespecting the premiership trophy, which includes an image of Provan and his little mate Arthur Summons, NRL CEO Andrew Abdo and ARL Commission chairman Peter V’Landys were unable to attend to farewell the league legend. 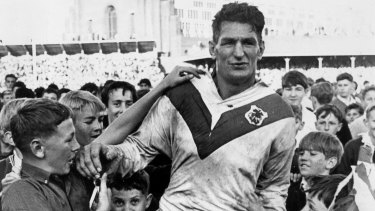 Immortal Norm Provan was laid to rest on Monday.Credit:Fairfax Media

Family, club officials and former players, including Johnny Riley, Craig Young, Rod ‘Rocket’ Reddy, Steve Edge, Ben Hornby and Jason Nightingale, all attended the invite-only event on Monday to watch the funeral via video from Caloundra. Coach Anthony Griffin wanted to attend but missed out because of limited numbers inside the function room.

Two other funerals for league greats were momentous occasions earlier this year: Tommy Raudonikis was given a state funeral in April, while Brad Fittler re-scheduled NSW Origin preparations so every Blues player could attend the state funeral for Bob Fulton in June.

The portrait of Norm Provan in the foyer at St George Leagues Club.

Abdo was due to attend but was forced to cancel early Monday because of “personal reasons” and informed Dragons officials. Abdo said he would have flown to Queensland for the actual service had the borders been open.

NRL officials told the Herald V’Landys’ invite was sent to a private email that is not checked regularly, and he passed on his apologies to the Dragons once he was made aware of the event.

“I was unfortunately unable to attend the live stream of the service for personal reasons,” Abdo told the Herald.

“We are working with Norm’s family and the Dragons on how we celebrate Norm’s remarkable contribution to the game for the start of the 2022 season.

“He was a legend of rugby league and there will be a fitting tribute from the game at the start of next season.

“I made my admiration for Norm known when we first became aware of his passing.”

Provan, the second-rower known as “Sticks” who won 10 straight premierships with the Red V – four of which came as captain-coach between 1962 and 1965 – was one of the game’s 13 immortals.

He lost his battle with dementia on October 13, and his funeral saw no shortage of stories shared about a giant of a man, with giant hands and a giant heart.

There was the day he arrived at the Sydney Cricket Ground to play in a grand final but was refused entry by a gate attendant because he had left his ticket at home. There were memories about his dedication to fitness and training, the signatures he signed for young kids after any given game, and the lemon squash and orange juice he enjoyed while his teammates opted for something stronger.

The only time Provan would allow himself a drink was the night of a grand final triumph, which consisted of “one or two Moscow Mules”.

There was other brilliant insight provided by family and friends on Monday, including the day Provan learned Summons had played rugby and represented the Wallabies.

Former league editor Tony Durkin, who became good friends with Provan, said his mate would have been “captain-coach of Heaven’s XIII”, and was someone who never liked the “gang tackle”, nor players who stayed down for penalties.

Hornby had fond memories of Provan, including the day he chatted with him at a captain’s run before he broke his games record for the Dragons – then 256 games – before Anzac Day in 2012.

“He had that aura, not too dissimilar to Wayne Bennett, they were both tall, that look on their face that commanded respect, and imposing figures, not just physically but with their aura whenever they walk into a room,” Hornby said. 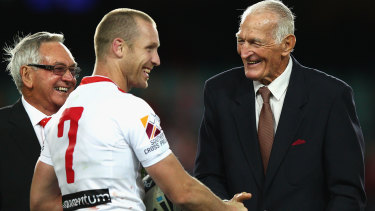