The NRL has shut down any thoughts of Shane Flanagan becoming a head coach before his two-year ban expires.

All off-season, this column has been told by St George Illawarra supporters, and even some people within the club, they expect Flanagan to be elevated from assistant coach to head coach should Paul McGregor get sacked. 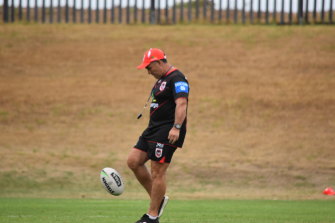 Dragons assistant Shane Flanagan was deregistered in December 2018 for breaching the conditions of his previous year-long ban for his role in the Sharks’ supplement scandal.

Flanagan fuelled that belief when he told The Sydney Morning Herald in Mudgee last week that speculation about McGregor’s future is the “elephant in the room”.

It was an extraordinary comment from an assistant coach just a couple of months into his return to the game. Some considered it disrespectful to the coach, who is a good man under enormous pressure.

No, the elephant in the room at the Dragons is actually Flanagan.

A reminder for those who might’ve missed the 10,000-or-so stories about the matter …

The former Cronulla coach was deregistered in December 2018 for breaching the conditions of his previous year-long ban for his role in the Sharks’ supplement scandal, in which players were injected with banned substances.

He was told not to make any contact with the club, or on behalf of the club, but did it anyway, such was his shortsighted belief that other people — and not him, as head coach — had failed his players as they were essentially treated like guinea pigs by controversial sports scientist Stephen Dank.

In December last year, the ARL Commission allowed him to take up an assistant coach’s role under McGregor following an off-season review at the Dragons by Phil Gould after they finished second last.

Almost immediately, frustrated Dragons supporters believed it would be a matter of time before Flanagan would take over if McGregor was sacked. 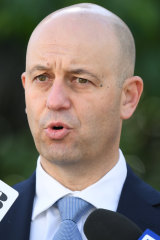 Todd Greenberg will not have the final say on Shane Flanagan’s future.Credit:AAP

Not so fast, says head office.

Any decision on Flanagan's future would come from the ARL Commission — not Greenberg. Regardless, the NRL says there has been “no softening” of the ban and made it clear Flanagan can’t even apply for a reduction within the next two seasons.

We were then directed to Greenberg’s remarks when Flanagan was allowed to join the Dragons.

“This is not a set and forget approach,” Greenberg said at the time. “Shane and any future club who employs him has numerous conditions which they must comply with and the integrity unit will continue to monitor his conduct over the next two seasons.”

McGregor has two seasons to run on his deal, but if he’s sacked early it would likely lead to the elevation of Dean Young as head coach.

Given the size of the payout, a horror run already with injuries, and another year without Jack de Belin – after his trial for allegedly sexually assaulting a woman was put back until later in the year, McGregor might be cut some slack.

Those within the Dragons report his working relationship with Flanagan has been beneficial; just having an experienced football brain as a sounding board has helped McGregor.

Flanagan’s “elephant in the room” comment stunned some — but not McGregor, who has been dealing with speculation about his future for a long time.

ARLC in flip over Coyne

Coyne was forced to resign last year after a drunken night in Singapore, where he was locked up, charged and fined for abusing a police officer.

He hid the charges and the fact he was prevented from leaving Singapore from the ARLC at a time when it was under fire for its controversial no-fault stand down policy, which was rushed in because of appalling player behaviour. Coyne only fessed up to V'landys when the Herald’s Roy Masters was onto the story. 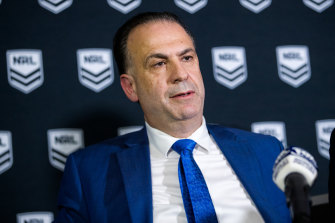 ARL Commission chairman Peter V’landys has upset some of his fellow commissioners.Credit:Edwina Pickles

“I have the highest opinion of Mark Coyne,” said V’landys, who is also chief executive of Racing NSW. “He’s one of the nicest people I’ve ever met, and I make no apology for having him at the races. He’s a friend.”

Last week’s item about V’landys meeting with Fox Corp executive chairman Lachlan Murdoch in Los Angeles certainly stirred things up, with fingers being pointed about who might've leaked details of the secret liaison.

We also detailed a brewing power play between the chairman and chief executive Todd Greenberg, whose two-year extension on his deal is yet to be granted.

V'landys opened the meeting with club bosses last Friday by telling them, according to several sources in the room, "Don't believe that shit in the paper today".

Which is strange because he told this column on Friday he “had no problem” with what was written. He denied he made the comment to the club bosses when contacted on Thursday.

V’landys has many strong characteristics but sitting back and playing the role of a silent chairman — as he publicly declared upon his appointment — was never going to be his style.

We suggested last week the commission was “split” about re-signing Greenberg. We were slightly off the mark: we’re told Greenberg has more support on the commission than some might think.

Smell of success for Farah

Robbie Farah’s amazing run of events since retirement last season is about to come to an end — and then he’ll be getting a nose job.

The Wests Tigers legend will be celebrated at a testimonial dinner of more than 400 people at Le Montage on Friday night. 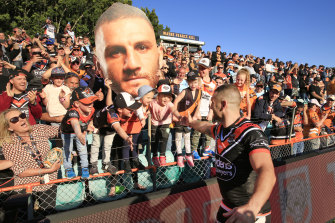 There will also be a smattering of past and present Tigers players, including Benji Marshall and Josh Reynolds.

The event is sponsored by Pepper Money and hosted by Farah’s booming sporting events company Two4Seven, which has taken him to events all over the world of late, from Anfield to watch his beloved Liverpool to the Super Bowl in Miami.

But the party has to finish at some stage: in a fortnight, he'll be getting a nose reconstruction so he can breathe properly. Farah estimates he broke his nose about 10 times during a 17-season career.

At the time of writing, we didn’t know if the Sydney Kings had progressed to the NBL grand final having taken on Melbourne United in their game-three decider on Thursday night at Qudos Bank Arena.

Even less clear is whether marquee star Andrew Bogut will be playing next season.

The 35-year-old looks like he’s playing injured, but this column is assured any decision on whether he plays another NBL season will rest with him — not owner Paul Smith, who this column had the pleasure of shadowing at last Saturday night’s game.

Earlier that night, Smith was locked in conversation with NSW Treasurer Dominic Perrottet and New Orleans Pelicans boss David Griffin, who was courtside to run an eye over the Pelicans’ NBA draft pick Didi Louzada.

Griffin was sitting metres away when Louzada drained a clutch three-pointer with 40 seconds remaining to win the game.

The young Brazilian has been on-loan to the Kings this season and the Pelicans are expected to send more of their players to Sydney in coming years.

“Sun Yang gets 8 years and keeps medals. Jobe Watson loses his Brownlow not the back of no positive test. Absolutey (sic) disgraceful. The world is in chaos.” — If this tweet is any indication, former AFL agent Ricky Nixon needs a hug.

Te Akau Shark’s stunning win in the group 1 Chipping Norton Stakes at Royal Randwick last Saturday should be framed and hung in a gallery. I really felt that needed to be said. Thank you.

Serie A matches cancelled, a dark cloud hanging over the Tokyo Olympics, World Club qualifiers, Euro 2020, NBA players being instructed to bump fists instead of doing high-fives … When will this coronavirus madness end?

It’s an even bigger weekend for … the Waratahs, who will attempt to win their second match of the Super Rugby season when they host the Chiefs at WIN Stadium on Friday night. Exciting times.