The NRL will take the unusual step of offering private education sessions for every coach and skipper to ensure the captain's challenge is not beset with problems in the opening rounds.

Just hours after the Australian Rugby League Commission officially endorsed the replay tactic for this season, the NRL wrote to all 16 clubs insisting it would meet one-on-one with clubs to help bed down the rule. 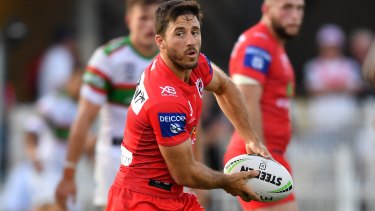 Stand-in Dragons skipper Ben Hunt made positive use of the new captain’s call during the Charity Shield. Credit:NRL Photos

"They don't have to, but should any coach or captain decide they'd like a one-on-one briefing with the referees or myself, then they're welcome to have that," Annesley said.

Each team will have just one unsuccessful captain's challenge per game and they can only be used to protest a decision before a structured restart of play such as a scrum, penalty or dropout.

The challenge can only be instigated by one person on the field within a 10-second time limit.

Dragons coach Paul McGregor hinted he was contemplating using green and red paddles from the coaching box to let his captain know whether to argue a call.

Critics have questioned whether a struggling defensive team may use their challenge late in a match to slow the game down even further, a sentiment Annesley disagreed with.

''Anything that's going to prevent glaring errors from being made is a good thing.''

"It's going to be hard for them to do that," he said. "They've got to nominate what they're challenging and they don't have the opportunity to use it after that if they need it. I think the risk the way it's set up is minimal.

"Anything that's going to prevent glaring errors from being made is a good thing. There's still going to be plenty of things to talk about, but overriding all of that is if it helps us prevent some major errors in the game – particularly late in the game that can influence an outcome – that can only be a positive."

Australian Rugby League Commission chairman Peter V'landys has driven the new system, introducing the idea after a resounding response to a captain's challenge in the NRL's annual fan survey.

Only last week, retired nine-time grand finalist Cooper Cronk and Kangaroos coach Mal Meninga expressed reservations about the rule until they had more evidence of how it would work.

But Matthew Johns, one of the sharpest minds in the game, said the NRL should go further and scrap the Bunker in favour of two unsuccessful captain's challenges per team.

"This is an exciting innovation for our game," NRL chief executive Todd Greenberg said. "It will add an additional layer of excitement, unpredictability and tactics to matches. Most importantly though, it provides an opportunity for a wrong decision to be overturned."