All of his career Christian Petracca has worn the label of the Next Dusty Martin and gently resisted the comparison.

Turns out in one way, Christian Petracca is the next Dustin Martin. He is the 2021 Norm Smith medallist after Martin won the past two.

Of course he is the next Christian Petracca, but this was a Dusty-esque performance. 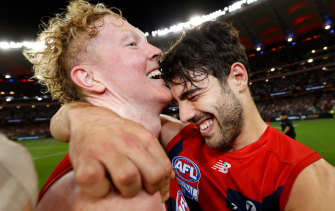 Petracca plays powerfully like Martin, he plays a similar forward-sliding role like Martin. But most compellingly, like Martin in grand finals of the recent past, Petracca understood when the game needed him most and, as importantly, where it needed him most. Whenever, wherever, he was there.

He grabbed 39 possessions, equalling a grand final record. He owned the ball.

The first goal of the game was kicked by Petracca, curling in a ball from the pocket. It was Petracca who collided with Bontempelli in that first quarter, fairly, to leave the Dogs skipper gasping. But his most consequential play came later, when the game was drifting from the Demons.

Petracca inserted himself in the moment. As Bayley Fritsch found the ball coming to him in that third term to start the scoring going it was in no small part because of the guidance from Petracca.

His goal in the third quarter took the momentum the Demons had already begun with Fritsch’s goals and gave it a little something. A long ball to the pocket and Tom McDonald went back to bring it to ground. It looked like a moment for Kysaiah Pickett to have the intervention in the game that felt like it had been coming. But Petracca gathered the ball instead, found space on the boundary then found space between the goals when from his view he could not have seen a gap. He curled it Peter Daicos-like to score a goal

It was the moment the game felt over for the Dogs. At the next centre bounce Petracca streamed out of the middle, the next one he gave off to Oliver.

Melbourne got on top in that third quarter because they monstered the Dogs out of the middle. Largely that was Petracca. It was also the switch of Luke Jackson to take more ruck. It was Clayton Oliver and Jack Viney all declaring, as they did at the start of the year, we are not going to stand for this any more.

The Norm Smith Medal is won by one man. This year it felt like it was won by two.

Petracca won the medal yet Oliver was in screen whenever Petracca was there in that period. When Petracca ran from the centre square Oliver gave the handball to him in space. When Oliver ran from the square it was Petracca doing Oliver the favour with the forward handball.

They are so yin and yang they are Norm and Smith. Although, Fritsch also kicked six goals while wearing Ron Barassi’s number, so he was also part of the argument.

The point is Melbourne were so dominant there were performances across the ground to mount an argument for the medal. Luke Jackson’s second half after moving on the ball? What a coming-of-age performance. Christian Salem throughout the whole game delivering from half-back?

Angus Brayshaw’s third quarter, with that diving effort, helmeted head first, to mark low and then goal? He was everywhere on his wing in that third quarter.

And Jack Viney’s muscle in the packs, punching a hole through a pack at half-forward to hand off to James Harmes, who kicked long for Fritsch’s third goal?

What about Big Ben Brown’s efforts up forward. They were everywhere.

Really this year the Norm Smith had to be won by a Melbourne player. There was special resonance to the medal this year.

Even in 2000, when the Demons were last in a grand final, there was not the same connection to history about the Demons’ grand final appearance as there was this year. In 2000 they were underdogs, this year they were playing the underDogs.

In 2021 it seemed fitting that a player breaking Melbourne’s premiership drought should win the medal in the name of the man who coached the Demons’ last flag.

It seemed fitting it was the man who has become as emblematic of Melbourne as his captain Max Gawn.
Petracca is not the biggest figure in the Melbourne team – that would be Gawn, who figuratively and literally looms over everyone – but he is the best player in the team.

Afterwards he knew who this win was for. “To the fans back home in Melbourne, we did it baby.” Yes you did.