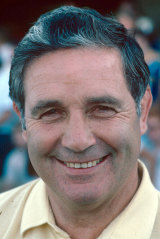 Tribute will be paid in round one to the inaugural Canberra Raiders coach Don Furner snr. Credit:AAP

Canberra officials are weighing up how best to honour club icon Don Furner before Friday's round-one clash against the Gold Coast, including plans for a special tribute to the Raiders great on their jersey.

Furner's son, also Don, has detailed for the first time how the 88-year-old had suffered a stroke during grand final week and feared his father would not see his beloved Raiders feature in their long-overdue decider against the Roosters.

A who's who of rugby league attended Furner's funeral on Thursday in the nation's capital, including Wayne Bennett and recent Canberra hall of fame inductee Craig Bellamy.

Furner was diagnosed with dementia a decade ago and Don jnr said it was a miracle his father did not lose the battle with the awful disease five months earlier.

"He had a stroke grand final week, but they weren't sure it was a stroke at the time,'' Furner told The Sun-Herald. "The staff [at the nursing home] told us he may not make it. This was very early in the week and I remember thinking, 'Please not this week, dad, please hold on'.

"I actually said this in my eulogy: 'We hadn't made it to a grand final in 25 years, so please get through this week, dad, for everyone's sake'.

"He was in a nursing home, not a hospital, so it took a little longer for the doctors to realise he had suffered a stroke. He stabilised later that week, but there was a feeling he could have gone at any time, but he held out – he held out for another five months. 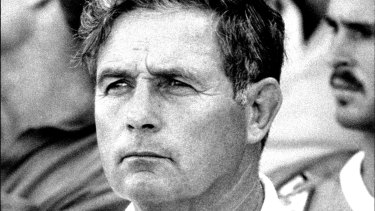 Don Furner suffered a stroke during grand final week and there were fears he would not make it to the decider.Credit:SMH Archive

It has been a whirlwind week for Furner who farewelled his father, the following day opened the club's new $19 million high-performance centre in the vibrant suburb of Braddon and attended the club's season launch.

Furner said there was still thought being given to how best to acknowledge his father, with club officials recommending Don snr be included on the players' jerseys. Something similar was done for the late Les McIntyre, Furner's mate who was the other driving force behind starting up the Green Machine.

The club is also committed to a fundraising appeal after the region was hit by bushfires during summer.

Meanwhile, Furner is grateful Curtis Scott was spared being sidelined under the NRL's no-fault stand-down rule as the centre's legal team continues to try and get the police to drop an Australia Day weekend assault charge.

However, even if Scott is convicted of the lesser charges, including acting in an indecent or offensive manner, The Sun-Herald understands the NRL will still suspend Scott for a handful of games.

Furner would not speculate on what would happen to Scott, who is due back in court on March 20, but said: "Hopefully it's been a massive wake-up call for him."

The Raiders have been given a huge chance by the bookies of going one better this year and winning their first title since 1994.