Before the Wallabies can bridge the gap to the All Blacks, Brad Thorn believes Australian Super Rugby teams must find a way to arrest the alarmingly poor record against their New Zealand counterparts.

Having watched the Wallabies cop a clean sweep of defeats against the nation Thorn represented 59 times at Test level, the Reds coach was frank in his assessment of the gap between the Australia and their trans-Tasman neighbours.

“(Against) the All Blacks – and I’ve been saying this around my team – we have to improve in all areas. They bring a complete package,” Thorn said.

“It’s not about strength in this position versus that position, it’s the full package; you saw them score maul tries, defend mauls, their kicking game, their continuity game, athletically, I love it. They’re the complete package.

“Get better in all areas. That’s what I would be saying.”

Thorn, who has signed a contract extension which will keep him at the helm in Brisbane until the end of 2023, stressed that he did not want to be a back-seat coach. 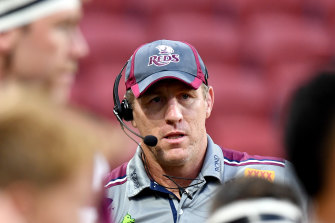 Brad Thorn is set to remain in charge of the Reds until the end of 2023 after signing a contract extension.Credit:Getty Images

But he did point out that New Zealand’s record in Super Rugby trans-Tasman – in which Australian sides won just two of 25 matches – indicated the clean sweep was inevitable.

“New Zealand gave us a pretty sobering thought out of trans-Tasman, I guess. We could see where things lay. We almost have to thank them. In the pre-season, we know the work that needs to go in. We know we need to get better in every area,” he said.

“It was 25 games, New Zealand teams won 23 of them. I think that’s a good way of measuring it.

“The Wallabies are having some tough contests with New Zealand. They’re good athletes, very good skill set, they have a good mindset. It’s a good system over there. 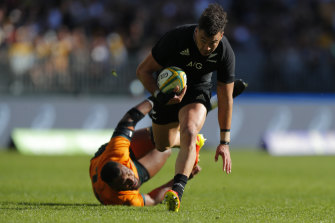 Brad Thorn says the Wallabies need to improve in every facet of the game to match it with the All Blacks.Credit:Getty

“So, it’s good having that. It’s a good marker. You’re up against the best in the world. I guess South Africa are the world champions but New Zealand Rugby is renowned for its standards, class and we have a hungry desire to challenge that.

“The big thing, for me, is not being big about the talk. It’s all about the action. I feel like the rugby public in Australia probably prefer more action and less chat about it.”

As for immediate fixes, Thorn would like to see more of his Super Rugby AU-winning side in the Wallabies’ starting XV.

Tate McDermott was the only Reds star to feature in the starting team that fell 38-21 in Perth on Sunday.

“As a Queenslander, yeah, I’d like to see more of it. I thought Tate was maybe best on ground over the last two Tests, he’s just killing it. You have Taniela [Tupou] and Jordan [Petaia], but there’s been injuries and guys who have gone back for the birth of their children,” Thorn said.

“Our job here is to help these guys up-skill and become better people and better rugby players.

“It’s their time now and they’re picking the best team they feel can get the job done.

“My job as a Queenslander and Australian is to just support them on that. Obviously, I would love to see more Queenslanders but I think every coach all around the other states would say the same thing.”

“Disappointing for Suli. I’ve really enjoyed being around him. He’s a really good guy and he’s a big-game player,” Thorn said.

“He’s come across as easy I’ve seen between the two codes. It’s massively frustrating for him, for us and for the Wallabies as well. I imagine it’s something we need to look at further.

“It’s something to look at when you go from league to union in that position. There is a lot of defence, running around, supporting. It’s a different game.

“Maybe it’s part of the transition. It’s not what we want.”