The Rabbitohs are preparing to lure rising England international Dominic Young from Newcastle to Redfern on a three-year deal from 2024.

The Herald has been told by sources with knowledge of negotiations, speaking confidentially due to their direct involvement, that South Sydney assistant coach Sam Burgess met with Young in recent days amid ongoing extension talks with the Knights and interest from NRL rivals. 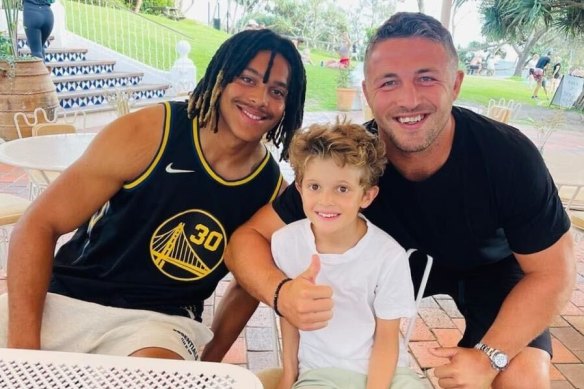 Burgess’ influence as a club legend and contemporary of many current NRL players is seen as an advantage at the negotiating table by plenty at Souths. His status as one of England’s best ever players especially resonates with Young, a recent Test debutant.

A breakout 2022 campaign and starring role for England at last year’s World Cup has put Young in the shop window as one of the summer’s most sought after free agents.

Fourteen tries in 20 games, despite Newcastle’s struggles last year, have put Young in line for a healthy upgrade on the contract that brought him to Australia from the UK.

His addition to Souths’ roster would add to one of the game’s most potent back lines, which already features star fullback Latrell Mitchell, recent Kangaroos Test debutant Campbell Graham and prolific try-scorer Alex Johnston. 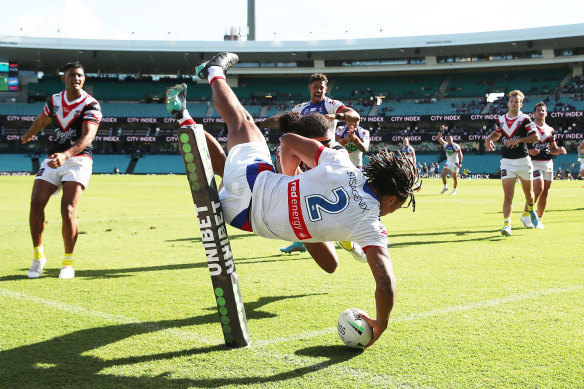 Dominic Young was one of Newcastle’s best in a disappointing 2022 season.Credit:Getty

A shift in-field from the wing to centre has also been flagged as a possibility on Jason Demetriou’s watch. Listed at 200 centimetres and 107 kilograms, Eighth Immortal and Knights icon Andrew Johns previously described Young as “one of the best athletes I’ve ever seen”.

Young told the Herald last year he was unsure of his fastest time over 100 metres but was confident it was “sub-11 seconds”. An in-game speed of 38 km/h clocked against Manly ranked as one of the fastest recorded across the 2022 season.

His England debut aged 21 kicked off an eye-catching tournament in which he scored nine tries in five games for the host nation, keeping veteran international Ryan Hall out of the side.

South Sydney have moved carefully with their recruitment and retention, given a salary cap for 2024 is yet to be locked in due to protracted CBA negotiations.

But it’s understood both Young’s current pay packet and the Rabbitohs offer do not break the bank and the club sees enough potential in him to continue negotiations despite the uncertain market.