Rebels winger Andrew Kellaway is a good story. He talks eloquently about being the ‘next big thing’ at the Waratahs and why he didn’t quite kick on during his first stint in Australian rugby.

However, the most pertinent thing about his story is the reason why he returned. It wasn’t for money, that’s for sure: it was an unsated desire to play for the Wallabies. 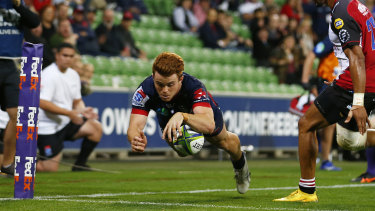 Andrew Kellaway goes over for the Rebels in their win over the Lions.Credit:Getty

2. Another week, another good Matt To’omua performance at No.10

We had our doubts about Matt To’omua’s best position at the start of the season and not all of those have been answered but you simply cannot argue with what To’omua is starting to put together in Melbourne.

After another posiitve outing in the Rebels’ encouraging win against the Lions, that’s four good performances in a row from To’omua in the No.10 jersey.

It also says something about Billy Meakes as a footballer that he has now had two No.10s in two seasons (Quade Cooper and To’omua) and quickly struck up an understanding with both of them.

To’omua is solid and he’s one of those players who gets better and better if the game turns into a war.
The Rebels have a really tough road trip about halfway through the season – the Stormers and Jaguares back to back – and the race for a finals berth looks particularly tough this year. Still, there has been a real substance to the Rebels’ last two outings and they are moving in the right direction. 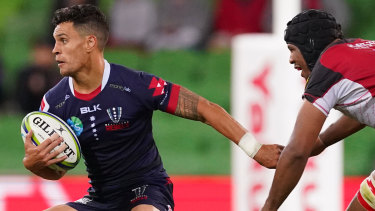 3. Will Harrison continues to play tough

Chiefs No.10 Aaron Cruden was dishing out the praise to the young Waratahs first five after the game in Wollongong and while the All Black was in a position to be generous, his words still rang true.

Harrison is tough. Cruden noted his appetite for taking the ball to the line and how this is simply crucial in the modern game.

The Waratahs No.10 is playing without fear and remains a bright spot in what is turning out to be a poor season. You don’t like to see young players go through a series of losses because it can become a habit as much as build character, but Harrison is doing just fine.

The Waratahs have problems but this young fella is holding his head high and he’s going to be around for a long time.

4. Brumbies back row is humming before the Waratahs come to town

Rob Valetini and Will Miller have the makings of a very good combination on either side of the scrum.
Miller had his supporters while he was at the Waratahs but he is really starting to come into his own with more game time. He’s a tough rooster but possesses some nice footwork too, so there’s a bit more to his game than being hard at the ball.

His growth is being mirrored by Valetini, who is getting through a lot more of the dirty work required of the No.6s this year. There was a sneaky Scott Fardy-style turnover in the first half against the Sunwolves and his finished the half by charging down the left flank for nice try off a great Tevita Kuridrani pass.

Clearly, he’s a big unit but there is a greater consistency to his game this year now that he is injury free and you sense there is still much to come.

Isi Naisarani continues to set the standard for No.8s in the Australian conference but it’s position where some depth is beginning to build.

Pete Samu is consistently strong for the Brumbies and this column has long been a fan of Jack Dempsey, although he is one the Waratahs who will have to hold his hand up this week and acknowledge he needs to be better.

Dempsey was far too passive in letting the Chiefs steal the ball for their final try, and even though the game was already gone Dempsey is a Wallaby and needs to be they guy who never stops. 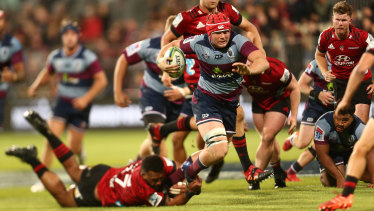 Harry Wilson makes a break against the Crusaders.Credit:Getty

In Christchurch, however, we got the first real sign that baby-faced Reds bruiser Harry Wilson is an extremely good prospect. There have been flashes in the earlier rounds but this was the 20-year-old’s most complete performance. Together with Lukhan Salakaia-Loto he gave the Reds some good front-foot ball and is a guy who just keeps volunteering for the tough carries.

With Naisarani in good form there is no need to rush Wilson but he’ll play for the Wallabies, no doubt about that.