Edinburgh: A red card for a moment of recklessness by Mohamed Haouas ended France's hopes of a Six Nations Grand Slam on Sunday, as they lost 28-17 to a clinical Scotland in a meltdown with echoes of their ill-disciplined exit from the World Cup last October. 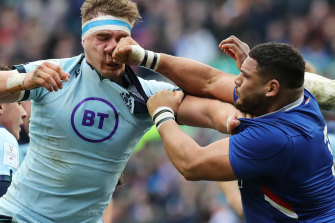 Scotland's victory, secured with two tries for Sean Maitland and one by Stuart McInally, means no team can next Saturday win the most chaotic Six Nations in recent memory, thanks to the postponement of Italy's remaining fixtures due to coronavirus.

England are in pole position, however, assuming they claim a bonus point and score heavily as expected whenever they do get to play their remaining fixture against bottom-ranked Italy.

France's failure to secure even a bonus point leaves them tied on 13 points with England, and probably needing a big win over Ireland in their last game.

Ireland are also still in the title hunt with nine points and a game in hand, but need to beat France in Paris and then win their postponed fixture against Italy.

Scotland's win sends them up to third in the Championship table, an encouraging turnaround after a hapless start to the campaign that saw arguably their best player Finn Russell walk out of the squad after a spat with coach Gregor Townsend.

Champions Wales meanwhile have slumped to fifth in the table with only a solitary win, piling the pressure on for their game against resurgent Scotland in Cardiff on Saturday.

Sunday's game at Murrayfield turned on the expulsion in the 33rd minute of Haouas for throwing a punch, in an echo of Sebastien Vahaamahina's red for an elbow in France's World Cup quarter-final defeat by Wales in Japan last year.

French prop Haouas swung his fist at Jamie Ritchie's head amid a wider melee to leave the match officials with little choice, although man of the match Ritchie said he bore Haouas no ill will after the final whistle.

"It's international rugby, tempers get heated and it's a physical game," he said when asked about the incident.

Les Bleus were in trouble even before the card.

Their collapse was partly the result of bad luck, as they lost their new linchpin Romain Ntamack early to a head injury after seeing powerhouse replacement hooker Camille Chat limp off in the warm-up.

But their misery was equally self inflicted, as in addition to Haouas's moment of madness they spilled passes, infringed repeatedly in the loose and even came off second best at scrum time.

They were in truth lucky not to have suffered a red card earlier in the game when Francois Cros tipped Grant Gilchrist onto his head in a tackle, the French flanker escaping with a yellow card.

Scotland, playing in a garish powder blue change strip, seemed a different side from the outfit that had fumbled so many scoring chances earlier in the tournament.

Maitland struck his first after a break from Adam Hastings, whose clinical goalkicking had earlier punished France for their relentless infringements at the scrum and breakdown.

The winger then bagged his second try after Stuart Hogg slipped Chris Harris into space down the left, with the centre bursting through to feed Ali Price in a swashbuckling attack that ended in the right-hand corner.

Stuart McInally then brought the rain-drenched home fans to their feet again as he scooped up a bouncing ball from his own lineout to romp over the line.

"We wanted to put in a performance to inspire the nation and hopefully we've done that today," Hogg said.

France took until the 33rd minute to show a glimpse of the attacking finesse of their previous games, but it was worth the wait.

Replacement flyhalf Mathieu Jalibert lit the touchpaper with a jinking break down the left, before quicksilver scrumhalf Antoine Dupont found Damian Penaud with a pinpoint crossfield kick to the corner.

That was as good as it got for the visitors, however, barring a late consolation try for captain Charles Ollivon.

In the weekend's other game, England beat Wales 33-30 at Twickenham on Saturday in a clash marred by a red card for try-scorer Manu Tuilagi and an unsavoury moment when prop Joe Marler grabbed Alun Wyn Jones's groin.