On a day Alastair Clarkson parted ways with Hawthorn, Carlton coach David Teague made a statement of his own, guiding the Blues to a 31-point win over St Kilda at a closed Marvel Stadium on Friday night.

Desperate to rebound from a stinging loss to bottom-placed North Melbourne which appeared to torpedo their finals hopes, the Blues finally shed their goal-kicking woes, lifted their pressure count while also embracing Teague’s greater defensive accountability to remain an outside chance of forcing their way into September action. 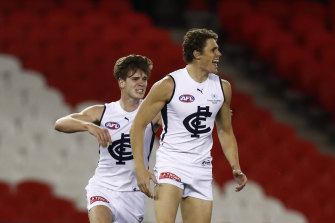 Charlie Curnow is all smiles after booting a goal for the Blues.Credit:Getty Images

The win, their fourth from their past six matches, came amid a wide-ranging external review of the Blues’ football department which has Teague under pressure, and speculation Clarkson could replace him.

For supporters of both teams, the result was perplexing. The Saints had been in good form but this result may prove to be a dagger in their finals hopes. They almost certainly will now need to win their remaining three matches to feature in September.

The Blues, already with a long injury list, were forced to use under-sized forward Jack Silvagni in the ruck for three quarters, with some help from Patrick Cripps, after Tom De Koning left the field with a pectoral issue and then left the stadium for scans.

Rowan Marshall and Paul Hunter dominated the hit-outs but it did not matter for Silvagni (25 disposals) was excellent around the ground. He has had a career-best year. Marc Murphy replaced De Koning at half-time and is now two matches shy of 300. 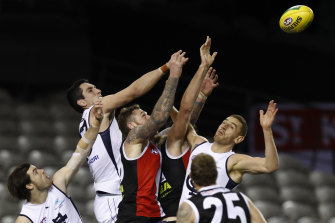 Jacob Weitering of the Blues and Tim Membrey fly for the ball.Credit:Getty Images

Key forward Harry McKay, having returned from a toe issue, underscored his physical and psychological importance by booting five goals and extended his lead atop the Coleman Medal table.

The Blues’ defensive tactics have been questioned all season, and were abysmal against the Kangaroos, but against the Saints a decision to go to a simple one-on-one style worked a treat as they built a lead of 50 points. 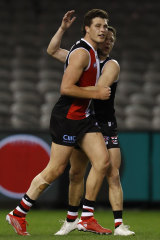 Fit for a King

Max King had the goal-kicking yips earlier in the season but has become almost automatic from set shots over the past month, including seven goals against West Coast last week. He had booted 15.4 from set shots during that period before Friday night, and delivered the Saints’ three opening goals against the Blues – from set shots. Weitering faced a nightmare evening when King led twice and converted, and then the star Blue conceded a free kick for holding, with King capitalising in an entertaining first term. However, from that point Weitering had a major influence and was one of the best afield. McKay booted two of his own in the first term to help the Blues to a two-goal lead by quarter-time.

McKay continued to have an influence in the second term, booting two more – care of well-weighted passes by Lochie O’Brien. King, however, felt the night-time chill, for the Saints struggled up forward. O’Brien, off contract and in his first senior match since round one, had some good moments and has a month to show he deserves to remain at Princes Park. Despite having 18 more contested possessions, the Saints trailed by almost five goals at the main break.

Teague had time for a smile when Charlie Curnow marked his return from a series of knee issues by slotting through a 55-metre goal with his first possession. It had been 761 days in the making. Curnow’s return after only two scratch matches had split opinion but it worked out well despite his low possession count.

In his return match after being left with a broken jaw in a sickening clash with Adelaide’s David Mackay, Hunter Clark had 13 touches, including 11 to half-time, and showed no signs of apprehension. However, his night finished early after his head clashed with Matthew Owies and he was consoled by teammates.