Retiring Western Bulldogs defender Easton Wood has urged the federal government to “pull their finger out” on legislation surrounding the advertising of sports betting, disappointed with a lack of progress on the issue he first raised almost five years ago.

Wood, who announced his retirement on Friday, has been an outspoken critic of the proliferation of sports betting ads on television, first airing his view publicly in early 2017. 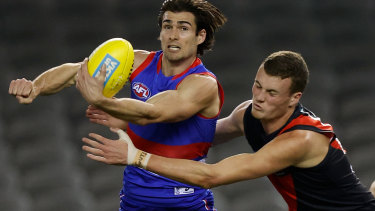 While new rules were implemented in 2018 precluding gambling advertisements on live sports broadcasts between 5am and 8.30pm, the 2016 AFL premiership captain argued not enough has been done.

“I wish it was further along,” Wood told the Sunday Age.

“It still shocks me that advertising is so prevalent. I’ve got no problems with people having a bet if that’s how they want to enjoy the game, it’s just, don’t shove it in front of everyone else’s faces and normalise it for a generation that thinks that’s the way to enjoy a game.”

Since he first aired his concerns on Twitter, Wood and wife Tiff have had two children; Matilda, two, and Frederick, almost one.

Wood, who has previously said he would be willing to take a pay cut if it meant limiting the AFL’s reliance on gambling dollars, said he was worried about having his children exposed to gambling advertising, but said that ultimately it was up to the government to take a stand.

“I’m concerned with it with my kids growing up, having it around, having it seamlessly integrated into games, I just don’t think the game needs it, to be honest,” Wood said.

The AFL last year signed a five-year deal with BetEasy, tying the company as the league’s official wagering partner until 2025. 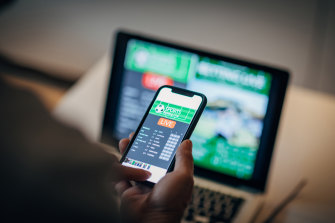 Gambling ads have been a contentious issue.

Earlier this year the AFL removed an anti-gambling ad from its website and social media one week into a four-week campaign due to a conflict with its Sportsbet sponsorship.

The league subsequently said the decision to remove the ad, sponsored by the Victorian Responsible Gambling Foundation, was a mistake.

Victoria’s 10 AFL clubs have all signed up to the VRGF’s responsible gambling charter. The Brisbane Lions have had corporate bookmaker Neds as a jumper sponsor since 2019.